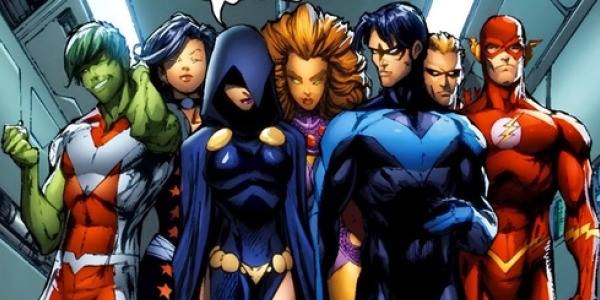 Television is entering an age of comic books, and it looks like DC Comics is looking to flood the market. They already have Arrow, The Flash, Constantine, and Gotham coming this fall, as well as the rumors of a Supergirl series joining The CW’s Arrow and Flash-shared universe. Well now is seems that TNT is looking to get on the bandwagon with Nightwing, but he won’t be working alone. Since teaming-up is all the rage right now, he’ll have back up in the form of the Titans.

The following details were provided by The Hollywood Reporter:

Based on characters from DC Comics, Titans revolves around a group of young superheroes-to-be who are recruited from every corner of the DC universe. The action-themed drama centers on Dick Grayson, who emerges from the shadow of Batman to become Nightwing, the leader of a fearless band of new superheroes including Starfire, Raven and more. The show is described as a dramatic adventure series that will explore and celebrate one of the most popular comic book titles ever.

Although I’m mildly optimistic about this one, I am worried that Goldsman’ is credited with the screenplay for Batman Forever and writing Batman & Robin. His credentials on the TV side of things includes writing and directing duties for Fox’s sci-fi series Fringe, which I haven’t seen but have heard mixed reviews.

The Titan lineup has changed over time; being recently rebooted after the New 52 re-launch. Characters like Starfire and Raven are up for grabs, but Cyborg and Arsenal have also  been a part of the team at one point in time. It makes you wonder if there will be an overlap in characters. We know that the movies and television series exist in separate universes, but what does that mean for all the other shows? Wally West has been a member of the Titans at one point in time too, but I image he is being reserved for the new Flash Series. Could Colton Haynes’ Roy Harper aka Arsenal make a guest appearance, or would they establish their own version of the character, or leave him out completely?

There’s a lot of questions at this point but be sure to keep checking in with the Big Comic Page we’re expecting a number of announcements as this project gets off the ground.

But for the time being, sound off in the comments – which members of the Titans would you like to see in this series? I mean… we’re finally getting a live action Nightwing! But it’s from the guy who brought us Batman and Robin… are you excited or concerned?

The writer of this piece is: Laurence Almalvez
Laurence has previously written over at Whatculture.com.
Laurence tweets from @IL1511