It’s been a busy old week for casting announcements for the fourth season of ongoing CW series Arrow, so to help you stay up to date with who you can be expecting to see gracing your TV screens in late 2015 and early 2016, we’ve broken things down for you into one easy, bite-sized portion;

FIrstly, Alexander Calvert (Bates Motel, The Returned) has been cast as established Bat-villain Anarky. According to the official blurb, “Lonnie Machin (AKA Anarky) is a deranged freelancing criminal who is willing to do whatever it takes to impress a potential employer.”

Next, Echo Kellum (Ben and Kate) has been confirmed as playing Palmer Technologies employee Curtis Holt – who happens to be the alter ego of Mr. Terrific.  Officially described as “Holt is a technological savant and inventor who works at Palmer Technologies under the supervision of Felicity Smoak”, the show’s executive producer Greg Berlanti also revealed that “our version of Mister Terrific happens to be gay.”

Jeri Ryan (Star Trek: Voyager) will also join the show as Jessica Danforth, a friend of the Queen family whose “political ambitions will place her in the crosshairs of a menacing antagonist.”  Ryan’s appearance will take place in the second episode of the series.

It has also been revealed that J.R. Bourne (Stargate SG-1, Teen Wolf) will play long-time Flash villain “Double Down” in the upcoming season.  Described as “a metahuman who can turn his playing card tattoos into deadly weapons”, Double Down (aka Jeremy Tell) will make his appearance in the third episode of the series.

Finally, in perhaps the most interesting – and potentially controversial – casting announcement, British actor Jimmy Akingbola has been cast in a season-long recurring role as Baron Reiter – more commonly known as Baron Blitzkrieg.  Reiter will serve as Oliver’s main adversary in the flashback portion of the show.  According to the description, “This grizzled, hardened and commanding man, who has no conscience and few compunctions, offers Oliver a job in his underground organization.”

The decision to cast a black actor in a role usually associated with a Nazi villain raised more than a few eyebrows, but Arrow executive producer/showrunner Marc Guggenheim addressed these concerns in an interview with Entertainment Weekly.  In the interview, Guggenheim said  “We wanted a really great villain for Oliver in the flashbacks. We wanted to come out of the gate strong with someone great and we wanted to, quite frankly, cast the best actor. We took the name Baron Reiter without any intention of turning him into Baron Blitzkrieg. Baron Blitzkreig is the evil Nazi super villain. Baron Reiter is not going to become Baron Blitzkreig in the show.”

Oh, and in one final bit of news, it is being heavily rumoured – although nothing has been confirmed as of yet – that Thangarian superhero Hawkman may be set to debut on the show ahead of his appearance on CW’s spin-off show Legends of Tomorrow.  Pinch of salt for the time being, but with the first half of the CW’s season serving to ‘set the table’ for Legends of Tomorrow, it makes sense that Hawkman should make an appearance alongside the previously confined debut of  Ciara Renee’s Hawkgirl.

Arrow is set to return to the CW with its fourth season on October 7th. 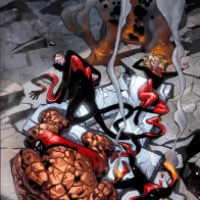