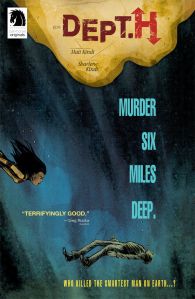 What happens when you take one part murder mystery, one part family drama, one part Sci-Fi exploration, stick it all in the depths of the ocean and put one of the most talented artists in the business today at the helm of it? You get Dept.H. Matt Kindt’s new series poses the question “Who killed the smartest man on earth?” and sets it under the sea on a science vessel.

Joining Matt on art duties is his wife, Sharlene, whom Matt describes as being the one who taught him everything he knows. If the art on this series is anything to go by, she is well on her way to being also one of the best watercolour artists in the business. Mixing Kindt’s signature style and layouts – which bring a sketchbook aesthetic and distinctly human feel – with those gorgeous watercolours, the book is nothing short of stunning. Every page could be up in a gallery, and thanks to the ‘old-school’ panel layout and magnificent splash pages, the story has an effortless flow to it that makes reading it an absolute pleasure.

Now, on to the meat of the story. It’s told between a series of flashbacks (also beautifully rendered), and our lead (Mia) beginning her journey down to solve the case of her murdered father. Kindt blends seamlessly between sci-fi and murder mystery, taking the tried and tested “whodunnit” approach to the characters involved. The pacing is ever so slightly slow, but in fariness, there is a ton of information to wrap your head around in this first issue, so it’s not necessarily a criticism.

The issue rounds off with an impassioned letter from Kindt, letting fans know that they want to be buying the issue in single format, and will be rewarded with original art, stories, and process insights that won’t be found in later collected editions. It’s nice to see creators putting so much of themselves out there, and if I wasn’t already sold, by the final page, I was hooked.