The series features artwork from Clayton McCormack (Heavy Metal) and colours from Kelly Fitzpatrick (Shade the Changing Girl), and we were fortunate enough to be able to sit down and have a chat with all three members of the creative team about what we should expect from the series.

BIG COMIC PAGE: Thanks so much for taking the time to chat with us.  Now before we get going, for any of our readers who may not be aware, can you give us a quick summary of what REDLINE is all about?

NEAL: Redline is a military noir, set in the near-ish future on Mars. A bomb shatters a very tentative peace between humans and the Locals, and our lead investigator is stuck between most everyone wanting the war to begin anew and finding the real answers behind the bombing. Because the stakes are so high, the comedy can be pretty simple. An ill-timed burp goes a long way.

BCP: Neal, what prompted the bold leap into the world of comics, and how have you found the transition from producing and art directing?

NEAL: I have been a comics fan my entire life, so I always figured I would make this jump at some point. In my early 20’s, I sent off more than a few terrible, terrible pitches. Ultimately, it just came down to finding the right people and right story at the right time. The pace of my day job on Archer has evened out where I have some time on nights and weekends to really focus on writing. Redline is one of the projects that came up pretty early, though it took a while for it to find its final shape.

BCP: Have you sought advice from any established comic writers to “show you the ropes” as it were, or is this just you learning by getting stuck in yourself?

NEAL: Kevin Mellon and Justin Wagner gave me some feedback early on, but for the most part, I studied some scripts online and studied the books that I loved. James Lucas Jones and Robin Herrera gave me some good notes on the story. Format-wise, to my knowledge, I didn’t completely screw it up.

BCP: What was it about Oni Press that made you want to pop your comic book cherry there?

NEAL: Justin Wagner (Storyboard Supervisor on Archer) had done some work with ONI and knew them really well. He put us in touch, and it just clicked.  James Lucas Jones and I talked about the project off/on for about a year before it ever really started moving forward.

BCP: Clayton and Kelly, how did the pair of you become involved in the project?

CLAYTON: I had been talking with our editor Robin about working on a project together, after we had met a couple years ago at New York Comic Con, and the pitch for Redline was one of the things she sent my way. I was onboard pretty much immediately, as I got the tone right away, and loved the world Neal had created, and how dark the humor was.

KELLY: I sat down with two editors at Oni over coffee after having been in communication with them for a while over wanting to have a book over there! They gave me two pitches with the art included for two separate books, but I only had time to work on one- so I chose Redline.

BCP: There’s a lot of science fiction comics out there.  And I mean a *lot*.  How did you guys go about making sure that REDLINE stood out from the rest of the pack?

NEAL: My goal was to keep it grounded and stay far away from the Inside Baseball of the tech. They can breathe. Don’t worry about how. Just know that they can and it’s fine (mostly.) A lot of sci-fi will default into giant paragraphs of text where they explain every little detail to you – because they’re proud of the thought they put into it. The detail nerd in me loves those paragraphs, but I think they are generally story killers.

CLAYTON: I think it very smartly downplays a lot of the sci fi stuff and uses it more as a support for the story that’s being told. For instance, it’s on Mars, but there’s no space suits; There are aliens, but they’re more of a looming threat than an overt enemy; there’s future tech and robots, but they’re not very glamorous and they break down all the time, etc. etc. It presents a future that isn’t dystopic, but sort of implies that the future is going to be just as crummy as the present. It’s less “THE WORLD OF TOMORROW” and more “next Tuesday.”

KELLY: We don’t treat the book as a sci-fi comic really. It’s more about the characters and their journey. I treat it more like a western.

BCP: Neal, as Art Director on Archer, a series with such a distinctive visual style, you must have had a fairly strong opinion on how this comic should look right from the get-go.  What has collaborative process between the three of you been like on the visual side of the series?

NEAL: Yes and no – when we were searching for artists, I knew a general look I preferred. I wanted something with heavy inks – nothing too clean – and someone with a good sense of tech design. Once I saw his portfolio, Clay was it. We didn’t do a test or anything, just sent him contracts. He was/is perfect for the book and any notes I’ve given have been fairly small. Same for Kelly, I don’t think we’ve had any huge notes. She’s batting 1,000.

As an Art Director, you always have notes you can give, no matter where you are in a project. You have notes. You see flaws. You just have to measure whether those notes are actually worth giving. If it only makes something 2% better, chances are you should just shut up and let it ride. With this gang, those decisions have been pretty damn easy.

BCP: Tell us a little bit about Coyle, our gastrointestinally-challenged leading man.  What’s his story?

NEAL: At the start of the book, he’s a little burnt. He’s been on Mars for a long time, and the Groundhog’s Day cycle of it has begun to wear him thin. This case should be open and shut, but it quickly becomes evident that something else is going on, something that seems a little familiar. As he digs into the case, he also digs into his past.

We will only get snippets. I like giving pieces of a story and letting the audience fill in the blanks. You see Coyle with a wedding ring in a flashback, but we never mention his wife or being married. The detail is there, the backstory is there, but the over-explaining is not. You may not even notice it, and that’s fine too.

BCP: There’s  a lot of visual comedy on display here, something that can sometimes be difficult in a comic that doesn’t go full-blown ‘cartoon’.  Clayton and Kelly, did you find that a challenge at all?

KELLY: No! I enjoy coloring fun books like Batman 66, Reggie, and Josie and the Pussycats. Adding humor in books just makes the books more fun to color! :)

CLAYTON: I feel like Neal and I have a very similar sense of humor, and I think that really helped as far as making some of the visual stuff land (hopefully) well. If you’re not on the same page from the start, it makes it a lot more difficult to illustrate, especially in Redline where there’s not so many “set up/punchline” style jokes as much as more situational humor. But at the same time, a good dick joke is a good dick joke, and sometimes they’re just hard to screw up. 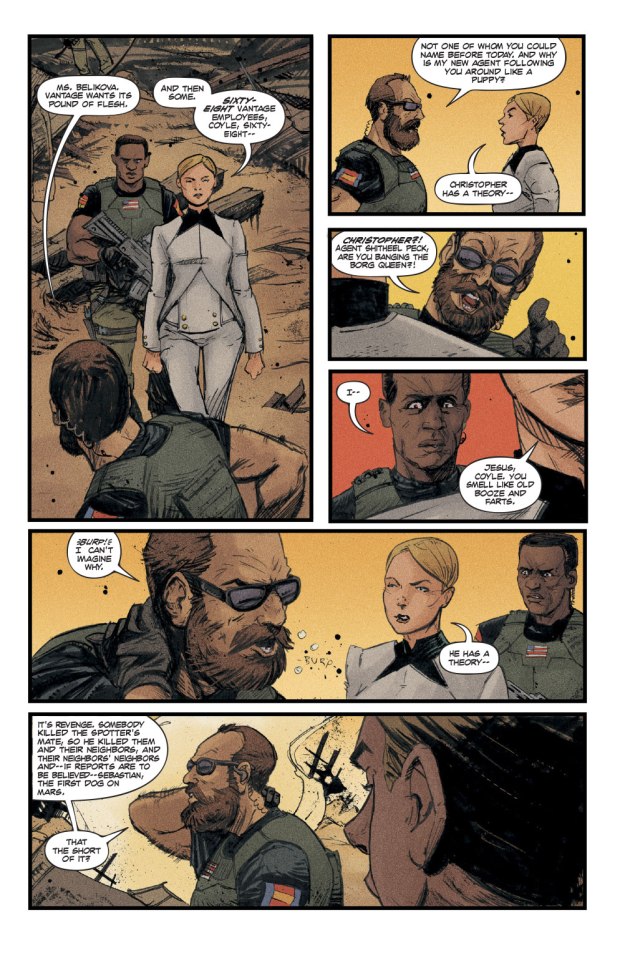 BCP: What kind of inspirations did the pair of you draw on in putting together the aesthetic of Mars?  This isn’t a sleek, polished futuristic utopia by any stretch of the imagination.

CLAYTON: I had been thinking a lot about Italian Westerns, actually. Neal from the get go had emphasized how oppressive the environment was, and it instantly made me think of how dusty, hot, and constantly sweaty a lot of those movies really feel, so I wanted to make sure to get across that feeling, especially with Coyle. Coyle is constantly in a state of discomfort.

NEAL: I gave Clay as much real world examples as I could find, as I feel like that makes the sci-fi more relatable. The tanks/mechs are older. They’re functioning, but somebody has to fix a busted hose on it or change filters to get it going in the morning. The only scenes where it feels more like the utopia you mentioned are those inside Vantage Solutions, our omnipresent tech giant.

KELLY: I think it’s fairly realistic from our world’s standpoint. I wanted it to read more as a gritty western with the interiors feeling more sterile or weathered from the environment pending on where they are in the story. There’s some fun contrasting palettes happening. Always gritty and noisy though.

BCP: And finally, if you could each say something to a reader out there who was on the fence about picking this one up to help convince them, what would it be?

NEAL: I have always loved you. You’re smart and funny and extremely attractive. Extremely. Cool? Cool. Now that we’re dating, I need your money.

OR (more likely): This is a book I love. I didn’t write it to be like something or because I thought people would buy it. I wrote it because I wanted to read this book. I hope you do as well.

CLAYTON: This book will make you laugh, make you cringe, make you wonder, and features the grossest thing I’ve ever drawn. Get your ass to mars.

KELLY: Give it a chance! If you like comedies and mysteries and aliens- check it out! 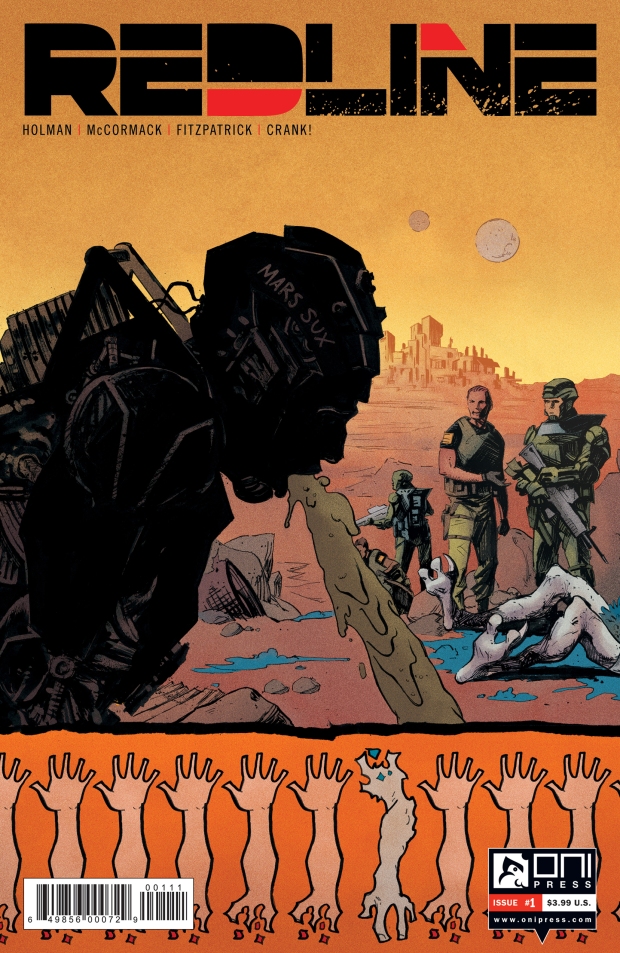 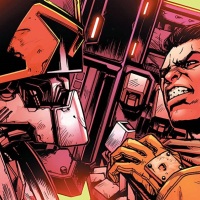