With Halloween right around the corner thoughts inevitably turn to horror in all its guises, and the comicbook medium has had its fair share of celebrated scary moments. Whilst I love those stories that burrow under the skin as much as the next man, sometimes I crave a story that hits you like a machete to the face and leaves you shaken to the core.

Undoubtedly there may be some omissions here that could have easily made the list – from the hyper-violence of CROSSED, the occult lunacy of FAUST: LOVE OF THE DAMNED or practically anything Josh Simmons has ever written – but these are my personal favourites that have stayed with me long after I closed the pages.

The final page of THE ENIGMA OF AMIGARA FAULT

It’s hard to pick a single standout moment from the work of Japanese horror-master Junji Ito but the last few pages of this are amongst his most spine-tingling.

After an earthquake reveals several human-shaped holes on the side of Mt. Amigara, young hiker Owaki meets fellow traveler Yoshida. She finds herself strangely drawn to one of the holes and claims it was made especially for her to enter. Soon they are joined by others who think likewise and before long scores of people take to the mountain and start to disappear into their own holes.

As a team of scientists discover, these fractures are thousands of years old and must have been dug from the inside out. After several months, other more twisted shapes begin to appear, which lead to the terrifying final pages, where one worker shines a torch inside and sees something that will haunt readers long after they’ve finished. Once seen, never forgotten.

Providence is a series that, in the tradition of Lovecraft’s best works, drips in slow-build dread and unease. But its most grotesque scene is displayed in full, unflinching detail.

Caught in the clutches of Elspeth/Etienne Roulet, our protagonist Robert has his entire being subjected to the ne plus ultra of violent invasion as he is used as a vessel for the propagation of the body-swapping black-magician. Robert’s homosexuality and Elspeth’s tender age only add to the feeling of revulsion Moore conjures in this scene, as nightmarish and unsettling as anything HPL ever imagined.

For all the praise that Alan Moore receives one accusation often trotted out is his supposed preoccupation with rape as a narrative trope. Whilst it’s a criticism I believe is unfounded – he has only ever shown the horrible, debased reality of the act IMO – the sexual assault that takes place in this issue is so horrific that it almost seems like a middle-finger to his accusers.

An issue that should need no introduction to horror comic fans – or comic fans in general, for that matter – Gaiman’s darkest story of his run on SANDMAN is often cited as a tour-de-force for good reason. But there is one moment that has always stood out for me; “Hour 12”.

Using Morpheus’ ‘Dreamstone’ to toy with the patrons of an interstate diner, Doctor Destiny eventually orders his captives to reveal something horrible about themselves. A girl named Kate tells a story of getting drunk and entering a funeral home, where she came across the body of a young man.

Although you can probably guess the rest, it doesn’t detract from the unnerving, shocking power Gaiman conveys in this scene. It’s a disturbing standout in an issue full of wonderfully twisted moments.

The death of Glenn – THE WALKING DEAD issue #100

Robert Kirkman’s zombie juggernaut is a series that is built on shocking moments so picking a single death is tough. From the prison massacre, Michonne’s prolonged torture of The Governor and the heads-on-spikes border-wall, it displays its grislier moments naked and unvarnished. But for me personally the horrific death of Glenn trumps the lot.

After introducing Negan, the leader of The Saviours, Rick and co. are subjected to the most brutal game of “eenie-meenie” ever devised, with poor Glenn being “it”. The initial blow is shocking enough, but Negan draws things out further with his gleeful taunting before delivering the final devastating blows that reduce the fan-favourite character to a twitching pulp.

I know of at least three folks who gave up on the series after this issue and to be fair I can totally see why. A heart-stopping highlight in a series that pulls no punches. 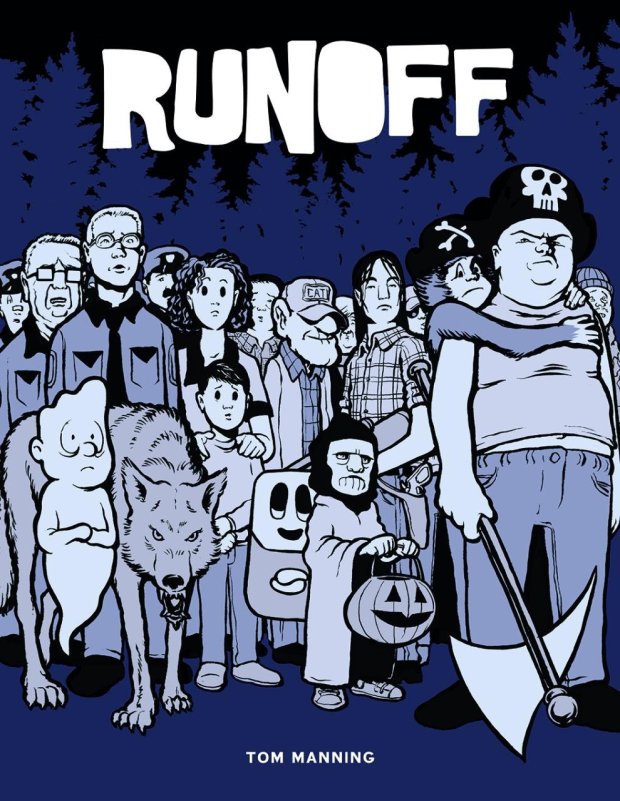 Tom Manning’s little-known horror series is one I often bring up to fans looking for something off the beaten path.

Dealing with the strange goings on of the small American town of Range, the series has obvious echoes of Twin Peaks but with the insanity dialed up several notches.

Unable to go beyond the town-limits by some mysterious force, the townsfolk are beset by a series of gruesome murders and strange occurrences, where ghosts manifest openly, animals talk and a cute floating head seems to be the harbinger of doom.

Before long, the killer is identified and killed; a monstrous humanoid creature with elongated limbs and a set of hideously gigantic teeth. Awakening from the morgue on Halloween night, this vampiric killer goes on the rampage, culminating in a splash page for the ages as the local police discover Mr Teeth feeding on several citizens, with huge, jagged chunks ripped from their limp bodies.

The writer of this piece was: Chris Downs
Chris Tweets from @ChrisDownsy