Up first we have RELAY from the creative partnership of writer Zac Thompson (The Dregs) and artist Andy Clarke (REPLICA, Batman). With a story by Thompson and red-hot writer Donny Cates (BABYTEETH, Redneck, Thanos, Doctor Strange) and a promise to deliver a series which is “equal parts The Fifth Element and Philip K Dick”, this one instantly captured our attention as soon as we heard about it.

A perfect future of intergalactic travel and community. Every newly discovered planet is unified culturally through a monolithic structure known as the Galactic Relay. Although the towering monument is meant to inspire conformity of ideas, technology, and progress – many resent the foreign structure. Jad Carter, a Relay employee, must keep the peace and act as an emissary to new civilizations. But when he finds the Relay’s mythological creator, Hank Donaldson, his idea of reality and the universe shatters.

Speaking about the new series, Thompson said: “Relay is in many ways a tribute to the science fiction worlds that inspired me as I was growing up. The best thing I can compare it to is Paul Verhoeven’s TOTAL RECALL. There’s a brain to this book beneath the action and the world we’ve created that mirrors our own. It’s something that evokes a lot of our modern fears about society, leadership, and control and puts them in a really colorful and detailed world.”

He continued, adding “Anyone who saw BLADE RUNNER 2049 is going to be right at home with RELAY. People should definitely throw it on their pull because it’s unlike any other science fiction book out there. I promise you we’re dealing with some insane shit and by the end of every issue you’ll have no idea where we’re headed next.”

RELAY #1 is set to hit shelves in July 2018, and you can feast your eyes on some of Clarke’s preliminary artwork below. 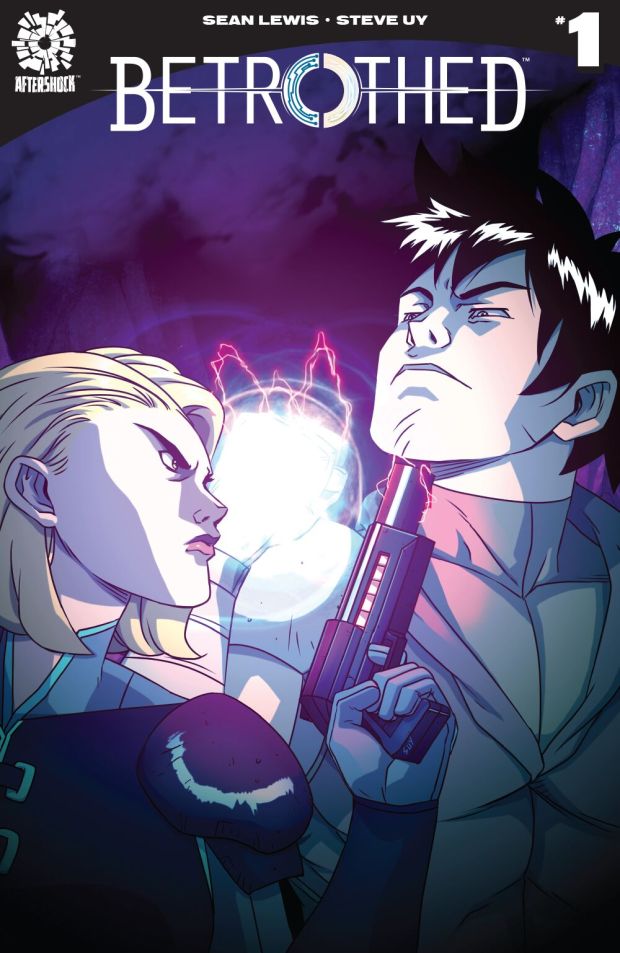 Billed as “Saga meets Archie”, BETROTHED tells the story of Kieron and Tamara, a pair who are both seniors at the same high school.  They’ve never paid much attention to each other, even though they are the only kids at school who are orphans. On the eve of their eighteenth birthdays they discover a lifelong secret: in a dimension faraway, they are each the leader of an army that is at war with one another…and what’s more, when they turn eighteen, they’re to be Betrothed or Fight to the Death!

Speaking about what prompted him to bring the series to AfterShock, Lewis said “Phil Hester. I live in Iowa. Phil is kind of a legend. We did an event at Daydreams Comics in Iowa City and AfterShock had just started putting INSEXTS out. And while Phil and I were talking and I asked if he knew who they were and he was like “Oh yeah, they’re a good company. I’m working with them right now. They’re good.” If Phil says they’re good, they’re good. And funnily enough, they are good.”

He added, “Mike Marts and the team have been awesome. I never have worked with an editor before. I like working in indie comics. Image Comics is my home and have been and continue to be amazing to me. I’m excited to start a relationship with AfterShock. They love comics and they give me freedom, that’s all I’m looking for from the places I work.”

You have a little less time to wait to get your hands on BETROTHED, the first issue of which goes on sale on the 14th of March 2018, but if that’s still too long to wait, make sure to check out a fully lettered and coloured four-page preview of the first issue below: