Sasha and Mary have reached the conductor, and hope, with his help, to obtain Mary’s old War-Habit. Unfortunately, the conductor bears old grudges for wrongs that can never be forgiven, and the price he asks for his assistance may be too high to pay.

I think I’ve said this before, but this is a series that continues to go from strength to strength. I had to check myself when I picked this month’s issue up because I couldn’t quite believe that we were only three issues in. There has been so much happening and the character development has been so good that I feel like I’ve been reading this for at least a year.

I always love to see what writers and artists who I recognise from mainstream established franchises can achieve when they’re given free rein to create their own worlds. Mostly I know Steve Orlando for the work he’s done as a writer for DC, so this is really the first time I’ve seen what he can do when he’s free of the constraints of an existing world, and the results are just brilliant.

Some of the people we meet in this series, like the Oprichniki, can easily be filed into either being a white-hat or black-hat. Others are not so easily defined. Our heroes, for example, are very definitely in a grey area. Mary’s past is extremely murky and while she’s seeking redemption for some of her past misdeeds she’s also clearly unrepentant of others. Sasha is the obvious alpha male hero riding to the rescue, but fundamentally he’s on his quest for the wrong reasons. Yes, he loves his brother and wants to free him from the internment camp, but what’s really driving him is guilt over the way he treated his brother upon finding out he was gay.

What’s nice to see in this latest episode is another insight into Gena’s situation and the reinforcement of the fact that she’s far from the helpless damsel in distress that Sasha’s narrative would lead us to expect. I think when Sasha finally makes it to Sochi he’s going to be in for a surprise.

The artwork in this issue continues to be as great as it has been for the previous issues. This is a dystopian world of a decaying culture and technology but Matthew Dow Smith and Lauren Affe give us some great hints at something far grander. The concept of the teleporting Vault Train and its realisation on the page as a mobile palace is fantastically gothi.c and I’m hoping that the more fantasy-led the world becomes, the closer we’re getting to the promised Russian Mythology we’ve been promised, as this is the aspect of the story I’m most looking forward to.

Another stellar effort from this creative team, and a story that I can’t wait to see more of. If you aren’t reading this yet, then sort your life out and pick up a copy. 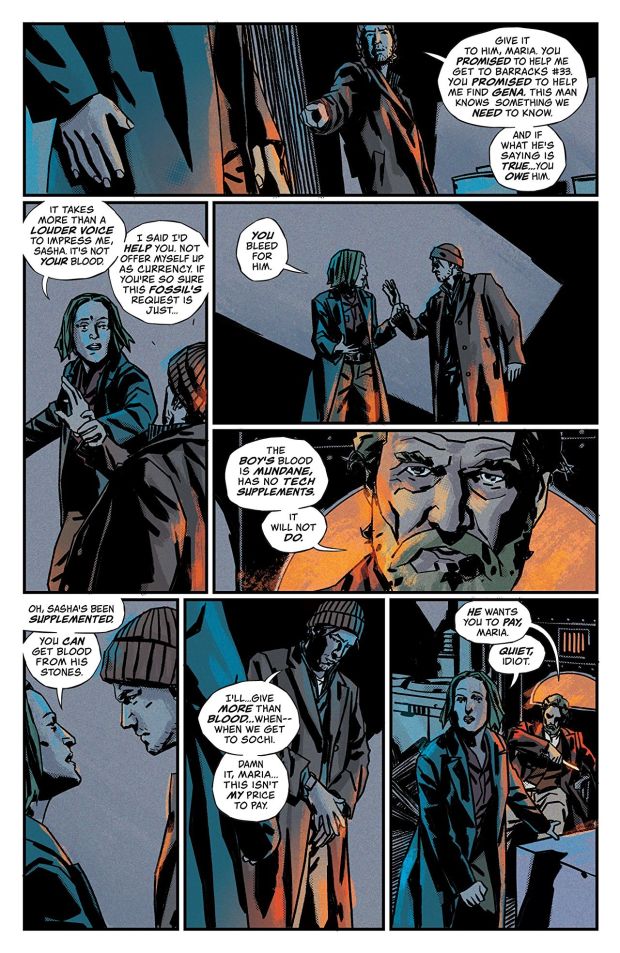