Despite containing a couple of corking confrontations featuring the likes of Black Cat and The Lizard, issue twenty of Marvel’s The Amazing Spider-Man probably still disappointed a fair few of its 76,903 readers due to Nick Spencer’s insistence on depicting both bouts of fisticuffs as disconcertingly one-sided affairs. In fact, having established Curt Connors’ overwhelmingly strong parental instinct to save his young boy’s life in one of this storyline’s earlier editions, Spencer does a complete U-turn on the character’s ability to overcome his aggression-inhibiting spinal chip by having the scaly antihero meekly succumb to the Last Son of Kraven, even though the cold-hearted killer has vowed to tear young Billy “limb from limb” and “mount his head on a wall.”

Combined with Felicia Hardy’s inability to best a lone Hunter-Bot who is initially lightly armed with just a knife and pistol, such a disappointing decline in the fighting prowess in two of this comic’s leading cast members arguably comes across as unsophisticated story-telling. In fact, it smacks of simply being contrived in order to help set-up the twenty-page periodical’s so-called shock revelation that the virtual link between a portly Great Hunt participate and his automaton cannot be severed until both the robot and its wealthy user have been destroyed/killed; “What the heck is wrong with this thing? Arcade! Arcade, come on –”

Admittedly, that doesn’t mean for a moment that Spencer’s narrative for this comic lacks any entertainment value, as its action-packed shenanigans most assuredly do. However, every time he sets up a potentially mouth-watering skirmish, the end result just seems to show the ‘good guys’ as being perturbingly ineffective. And, in the Black Cat’s case, the only reason the former Crime Boss is alive is because the man who shot her suddenly gains a conscience just long enough to be reminded that he has a boy about the same age as The Lizard’s sobbing son.

Perhaps this publication’s biggest strength therefore lies in the artwork of Humberto Ramos, which do an awesome job of putting across the increasing frustration felt by the Last Son of Kraven with his father’s plan. The clone is clearly absolutely beside himself with rage by the time he encounters Curt Connors’ alter ego, to the point where this book’s audience can almost physically feel the man’s relief when he initially gets to beat down his ineffective opponent. 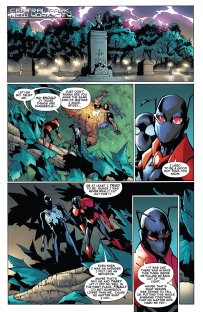