“Don’t worry, he’ll grow out of it” is a phrase I heard a lot as a kid, but sorry mum, I’m still a wrestling fan.

Wrestling is often looked at as an unusual thing to follow as an adult, what with its reputation for being little more than pantomime. Plus, with names like Hulk Hogan and The Rock making huge names for themselves outside the squared circle, it’s no longer the athleticism many know them for.

In the ring, the muscle-bound American hero always had to beat the bad guy. Whether it be the foreign bad guy or a giant, we always knew that the tyranny would eventually be toppled. But the truth is, we didn’t really care if we knew the outcome – we can forgive a boring match but we always passionately cheered the big personalities. Last year I pledged on Kickstarter to a comic that seemed to be going to great lengths to honour the golden age of wrestling, so join me, Comic-Maniacs, as I combine my love of wrestling with comics.

Damian of Art Ninetwo Comics set himself the challenge of immortalising heavyweight heroes in a galaxy-saving showdown. GGA (the Galaxy Grappling Alliance) was inspired by his childhood love of wrestling, starting with The British scene in the late ‘70s and early ‘80s, before the UK explosion of the WWF in the mid-‘80s. Damian has worked passionately to create GGA as a homage to that golden era of the squared circle. This is abundantly clear with nods to some of history’s most iconic themes. For me it was the retro poster designs of the cover and Kickstarter rewards that really hooked me in.

The UK scene was blessed with Big Daddy and Giant Haystacks, whose feud would dominate television for years, two men who were not only larger than life in size but in personality. In GGA they don’t wrestle for belts or Viagra on a pole (seriously, look it up).  Instead, the stakes are far higher. In wrestling, personalities are always pumped up to 1000%, but when you are the wrestling star of the entire galaxy you have to bring the personality and the pain in order to save entire planets. 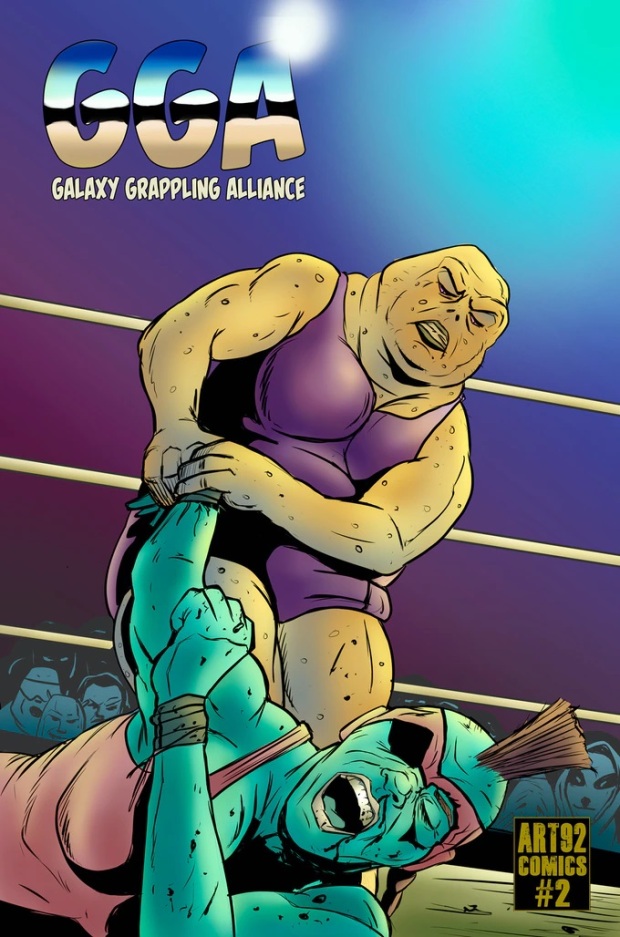 Last year I pledged to issue one and I could not have been happier with my rewards. I mean, look at everything I received for my £15 pledge in the photo below. One signed physical copy of issue one, a PDF version, an exclusive A4 print and a custom A4 wrestling poster featuring big burly me vs the legend that is “Macho Man” Randy Savage.  £15 for this haul was an absolute steal, and the pledges for issue two are just as bountiful. 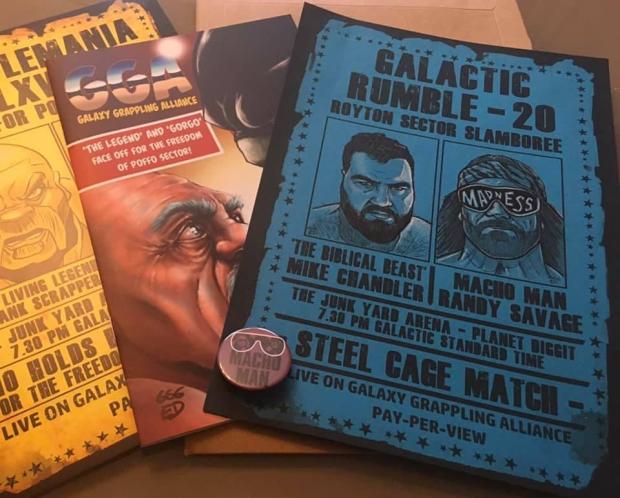 Something else that really that impressed me about the series is the fact that the turnaround between issue one to two was so quick. Keeping my interest and keeping things fresh is huge for Kickstarter projects. Too many times have I pledged a first issue and totally lost interest by the time two came around. It’s also worth pointing out that reading issue one almost became like a “Where’s Wally?” game, with me seeking out as many wrestling Easter eggs as I could. It may be cheesy; it may be outrageous but it most certainly is the days most wrestling fans hold dear.

Check out the Kickstarter running now for issue two (CLICK HERE) with many pledge levels packages including copies of issue #1 and the two tasty options below:

If you have made it this far, I suggest you check out Damian and Art Ninetwo’s other works at facebook.com/artninetwo. Joined by @PencillingTheJ, Damien launched Art Ninetwo Comics back in in October 2019 with their horror anthology comic, Pre-Mortis. Since then they have released several projects including Galaxy Grappling Alliance #1, all-ages semi-biographical title ‘My Little Green Bike’ and recently their first How To book – ‘Drawing Dogs and Cats made easy’. Keep an eye out for your local comic events for Art Ninetwo signings. They are a great pair to sit and chat with lots of varied works to show.

The writer of this piece was: Mike Chandler
Blax Tweets from @mike_moans ‏

1 Comment on Whatcha Gonna Do When the Galaxy Grappling Alliance Runs Wild On You? [KICKSTARTER]