During the First Century, Britain saw the rise of Queen Boudicca whose exploits came very close to causing the Romans to retreat back across the English Chanel by cutting a bloody swathe across the country, leaving tens of thousands of Roman soldiers dead in her wake. Andraste tells the story of rise of Boudicca and Roman General Gaius Suetonius’ attempts to make all of Britain an annex of the Roman Empire.

For a Kickstarter funded project, this series has some lofty ambitions. Reading Honor Vincent’s progress blog, this is a story that could easily span a dozen issues, and I really think that it could and should.

The story of Boudicca is just one story in the long, long history of the British Isles, and while it’s one that has been told with differing levels of accuracy and embellishment over the years, I don’t think I’ve ever seen it attempted in comic format before.

This is not a “history”, although it does draw from historical writings, and the characters of the time. Honor Vincent’s first two issues in the series provide some interesting character development and world building, along with some valuable lessons about who writes history and for what purposes. It would be easy to adopt a more fanciful telling of the story, more of a swords and sandals, Conan and Red Sonja approach but the interaction between Timoleon and Plinius serves as a teaser of what that could look like, as well as a way of trying to ground the story in a more truthful telling.

There is some really good artwork in this series. Yes, there are also some inconsistencies, and the odd panel where the colouring just didn’t work for me, but for the majority of the first two issues the artwork is pretty good and I think Abel Cicero does a solid job throughout. I don’t often mention the work of the cover artists, and I really should spend more time doing so. The artwork for the second issue produced by Ariel Cotton in particular is fantastic, and while I’ve just stated that this series seems to be making a conscious effort to avoid becoming standard swords and sandals fare, that cover feels like it has been ripped straight out of the pages of Robert E. Howard.

This series has been something of a slow burn so far, but it’s one that definitely has a story to tell and the writing and art behind it are both good. Personally I’d like to see this in bigger chunks. The slow burn is a little too slow from me to only get it in 30 page instalments, but thankfully, a Kickstarter campaign has just been launched for the first three-issue arc, which should hopefully serve as a satisfying introduction to this story for new readers. I’d also love to see the full twelve-part finished story in one collection somewhere down the road. 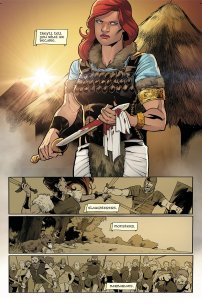