It’s The Social Network meets Hellraiser. When the world’s biggest influencer posts something irredeemably horrific online, the world changes in an instant. Now it’s up to his social media manager, Anne Stewart, to fan the flames of outrage and create a sensationalist campaign that rewrites the rules of “banned content.” Thus begins a carnival of lust, revulsion, desire, and disgust – all for viral videos.

Speaking about the series, Thompson, now on his SEVENTH AfterShock book, said “I Breathed A Body is a supernatural horror book set in Silicon Valley about the voyeurism of violence. Thanks to social media, we’ve become prepared to see death and despair at any moment. Modern social networks are a relentless barrage of provocative content designed to keep us outraged, engaged, and fearful. This book is an indictment of the Big Tech companies who engender and profit from this vitriolic environment.”

He continued, adding “Modern content culture deals in excess of everything. Violence, sex, depravity. We’ll consume anything that’s fed to us by our influencer idols. I Breathed A Body will lay bare the intimate psychology behind creating depraved content. The story follows social media manager, Anne Stewart who gave up her previous life to work for the most popular influencer in the world, Mylo Caliban. He’s an ultra-famous prankster and general shithead (think the Paul brothers), but Anne doesn’t mind making content with the kid. Until one night where everything changes. Mylo uploads something so vile and shocking that it threatens to change the world forever. This act throws Anne into the impossible position of planning and creating violent content in the pursuit of “viral videos”. And with each upload, things keep escalating.”

The book serves as Andy MacDonald’s first AfterShock offering, but Thompson was quick to sing the praises of his new collaborator, saying “Andy MacDonald’s art on this book is stunning. Those who admired his art on Multiple Man or Rogue Planet will be blown away here. We’ve built an immersive world with little flourishes of magic, like biotech phones with wings. His character work is immaculate, giving each member of the cast a life of their own and brings a real pathos to the whole cast. This is a sad world, filled with broken people who hide behind excess. And finally, Andy’s impeccably detailed line work makes the horror pop off the page and burn into your eyeballs.”

Featuring colours from Triona Farrell, letters from Hassan Otsmane-Elhaou and an incentive cover from Trevor Henderson (which you can feast your eyes on above), the 32-page I BREATHED A BODY #1 goes on sale January 20th 2021, and we absolutely can’t wait. 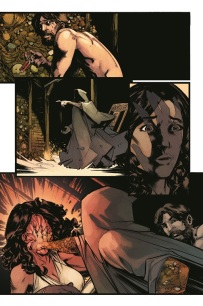 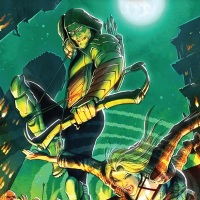