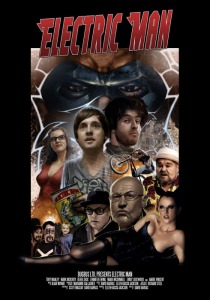 Recently we were contacted Writer/Associate Producer Scott Mackay about his independant film “Electric Man” and invited to watch it for review.  The film is set in Edinburgh and Glasgow and was made on the ‘micro-budget’ of £55,000 by first time director David Barras and revolves around the lives of two comic book store owners Jazz (played by Toby Manley) and his under achieving colleague Wolf (played by  Mark McKirdy) who encounter a fabled mint golden age comic; Electric Man, Which draws them into a game of dog and cat and mouse.

Since it was released the film has had screenings at a number of conventions such as Kapow! and SDCC and was warmly received.

Straight away the film sets out the central premise of the film as we see that the nefarious Uncle Jimmy (Played by Marillion singer Fish) will do just about anything to get his hands on the comic that the film centers around as he needs to sell it to pay of debts. Following the opening scene is an animated opening sequence that shows fantastic panels from the fictional Electric Man with artwork provided by Graham Manley and gives you the rough history of the hero in the comic.
What ensues is a crime caper with characters like the deceased owner of the books daughter Lauren, Electric Man fanatic Edison Bolt and the aforementioned Uncle Jimmy vying for the rare item with Jazz and Wolf being stuck in the middle but trying to get a piece of the pie to pay the overdue rent on their shop Deadhead Comics (yes, the real store in Edinburgh). At the same time the character of Wolf’s girlfriend places an ultimatum on him to sort his life out and forget about the shop and get a job as a chemist, Unless they sort the comic out and get money and keep the shop afloat until business picks up this will be his only option.

The performances are engaging with Jazz and Wolf having the kind of chemistry that pals do and the performance from Mark McDonnell as the eccentric American collector Edison. As mentioned the film also makes use of real locations and they are shown well with shots showing the fetching streets and sights around Edinburgh but also grounding it in the very real comic book store. 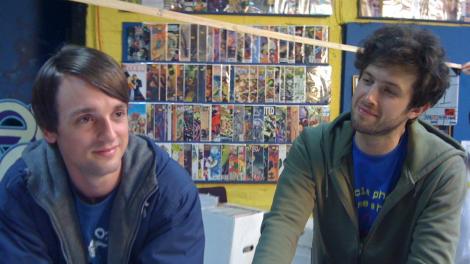 There were parts of the film that I disagreed with however, As I felt that the exchanges between Jazz and Wolf could have been more organic had they chewed the fat about comics a little more, They run a comic shop and we are told that the character of Wolf puts them above all else so an exchange or two behind the counter would have fleshed them out a little. That isn’t to say they don’t speak about comics but when they do it seems to service the plot and not to give them character. Which is somewhat understandable so as to not distract viewers with a spot the reference mentality, It is just i felt Jazz and Wolf should be arguing over who would win in a fight Electric Man or …. because this would be the language I myself would use with someone else who loves comics, But I will admit that could be my bias. There was also parts of the film where the tone changes such as a slapsticky scene with a frying pan which seemed at odds with the kinda offbeat feel the film was going for, It distracted me somewhat especially since slapstick is so hard to pull off.

But those were my main criticisms and hardly kill the movie, Overall it is a rewarding and offbeat comedy with all the plot strands tying together at the end surprisingly neatly which was crucial when the characters had been shown throughout as scheming double dealing and triple dealing.  It has vibe very much like other films I hate making comparisons but Jazz and Wolf fit a similar mold to Dante and Randell at the same time the film is kept fresh not only by the location but also by having the crime caper type plot with a bit of romance here and there rather than  just exploring life behind a counter or as a ‘slacker’. The story itself revolving around one of the rarest comics ever being stolen was fairly spot on, After all Lionsgate announced last year it planned to make a heist movie about  the real life theft of a copy of Action Comics #1, so it isn’t all far fetched and was rather prescient on the writers part to get Electric Man out there while the iron was hot. After seeing this I would definitely be more inclined to seeing any further movies by the team.

In short whether you are a comic book fan or not, there is something in this film for you to take out of it.