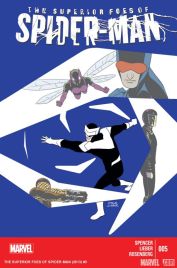 When it comes to deciding what my ‘favourite’ comics are at the moment, there are a lot of factors that come into play.  Does the artwork impress me? Is the writing sharp and exciting, without being clichéd? Do I actually care about the characters?  But I think that in a lot of ways, the true test of whether a comic makes the grade for me or not is just how excited I am to read the next issue.  And in that respect, Superior Foes of Spider-Man (the ‘best comic with the worst name’) is definitely right at the top of my list.

A title that’s almost impossible to read without a smile on your face, this series has carved out a fairly unique niche for itself pretty much from the first issue.  Initially seeming like yet another pointless Superior Spider-Man tie-in, Nick Spencer and Steve Lieber have instead combined to make something truly special, a gloriously ‘indy’ feeling Marvel title that, in a lot of ways, doesn’t really need the Marvel license behind it.  Yeah, it’s cool to occasionally see some familiar faces popping up (usually to administer a butt-whopping to our ‘heroes’), but the writing is so strong and the comic timing of the artwork is so spot-on that I’m pretty sure this book would work in any universe and with pretty much any group of down-on-their-luck villains.

One of my favourite writers for quite some time now, Spencer has added a whole new string to his bow with this title, showing a brilliant gift for humorous dialogue that he had previously kept under wraps.  The banter between the members of the Sinister Six (or ‘Sinister Four’ now, I guess) is nothing short of brilliant, and comes across as an entirely realistic group of guys and gals ragging on each other.

This issue sees the ‘gang’ attempting to retrieve the fabled ‘head of Silvermane’ from The Owl, and the execution of this heist is a thing of absolute comic beauty, a slapstick work of art that had me laughing out loud on more than one occasion.  Seriously, Ocean’s Eleven this is most definitely not.

Steve Leiber’s artwork, while not perhaps as detailed or as ‘epic’ as some of his counterparts, works perfectly for an ‘indy’ feeling title like this, and his ultra-expressive style (including some pretty killer comic timing of his own) goes a long way in carving out the unique niche this book has found itself in.  He has also shown a flair for using what could best be described as ‘image bubbles’, providing hilarious insights into what people are thinking, feeling, and – in the case of The Beetle – playing with on their phones.  In fact, perhaps my personal highlight of this particular issue is Beetle switching her phone to ‘Airplane Mode’ right before the heist.  It’s little touches like that which set this book apart from the rapidly growing market for offbeat, almost Hawkeye-esque hero shenanigans that seems to be crowding the shelves lately.

I won’t delve too much into the story, but suffice to say there’s a lot going on here, including a gloriously absurd final couple of pages that are definitely going to make for some interesting reading moving forward.  Simply put, Superior Foes of Spider-Man is a bandwagon that everyone reading this needs to hop onto before it picks up much more speed.  I honestly can’t recommend this title enough.