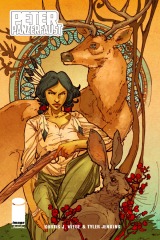 For those of you unfamiliar with Kurtis J Wiebe and Tyler Jenkins’ riff on J M Barrie’s impish immortal, a little background – take one part Peter Pan, extrapolate the characters into adulthood, then add a dash of Band of Brothers, another of Saving Private Ryan, then stir well, and there you’ll have it: Peter Panzerfaust – a rip-roaring adventure yarn set in Nazi-occupied France.

This issue picks up precisely where #16 left off – focusing fully on Tiger Lily’s quest to eliminate the men responsible for her father’s death, and maintaining the rather excellent framing precedent from the previous issue: Lily’s diaries as read by our modern-day reader surrogate John Parsons.

Jenkins’ art is the highlight – totally refined, with sharp contrasts of green and red, as well as a rakish air that strikes almost of a gauche Tintin. Most impressive is a dialogue-free, 4-page sequence as Lily single-handedly raids a hotel – a master-class in dynamic, cinematic story-telling.

That’s not to say that the writing from Wiebe is anything less than stellar – the dialogue crackles with authenticity, particularly in the opening encounter at a German checkpoint.

The two combine in the final six pages of the book to create an electrifying denouement, heavy with dark, shadowy imagery and a distinct vibe of Poe to boot, juxtaposing the death of Lily’s parents against the hunt for her sharpshooting target through a pitch-black forest.

If there’s one weakness – and it’s borderline at best – it’s that the issue is entirely Peter-free (with him having been captured at the end of the last) and whilst he’s missed, Lily is more than capable of carrying the story forward, and the series as a whole shows no sign of slowing down any time soon. 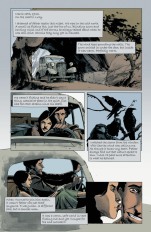 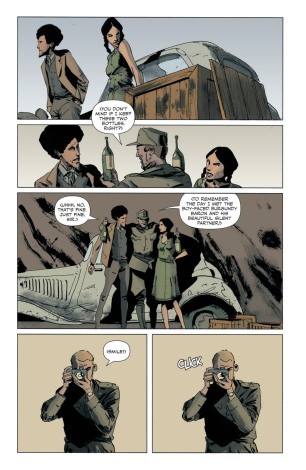 The writer of this piece was: Ross Sweeney