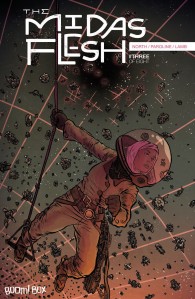 A ragtag crew of rogues, on the run from a sinister space Federation (are space Federations ever not sinister?) have stumbled upon the deadliest weapon in existence. An old man’s severed finger. Granted the old man was King Midas. Even after death his finger is capable of transmuting anything it touches into gold.

This is a fun comic with a bizarre central concept, one made even odder by the fact that as well as the two humans in this tale there’s a dinosaur in a tie and a talking slug. Taking the myth of King Midas and expanding it to horrifying levels, this issue asks a lot of crazy questions about the possibilities of the Midas touch and takes great delight in thinking big about the consequences.

The cartoony artwork fits the tone of the story very well. It’s a light hearted, slightly eccentric romp and anything without the same lightness of touch would surely seem at odds with the content. I mean, it has a dinosaur in a space suit talking to a slug on a spaceship on a planet made of gold. Cartoony fits it perfectly. Plus the animated facial expressions of the characters helps sell some of the comedy, this is a pretty dialogue heavy story and seeing character’s faces squirm in thought or freeze in terror helps tell the story on a visual level.

While the dialogue is zippy and humourous, the story itself isn’t. There is a lot of incident in this issue but despite that there’s not much forward progression. It feels like this series is on the cusp of going into strange new areas, but this issue feels like a lot of set-up for things to come. 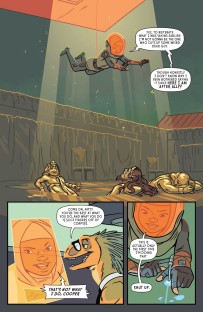