Although C2E2 is over, we’re not out of the woods yet. In fact we’re going into them this May. The Woods is an original comic series by James Tynion IV, coming soon from BOOM! Studios.

A former student of Batman writer Scott Snyder who is also currently one of the writers on Batman Eternal, James has co-written stories in the Court of Owls series before going on to write titles like Talon and Red Hood and the Outlaws. I had the pleasure of speaking to him about his upcoming solo project, and this is what transpired. 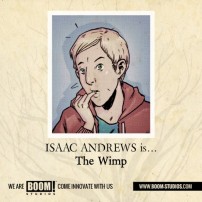 BCP: The original press release was like a teaser and has driven me crazy, I want something. Can you give me something?

JT: Haha! The basic premise of the series I brought to Boom Studios that got them very excited is the idea of a regular ordinary mid-western high school that just gets transported to the middle of an alien forest, and everything goes to hell. Everything that could possibly go wrong is going to go wrong in the series. It focuses on a small group of people who aren’t friends. Some of them are friendly with each other, but they aren’t a group of friends. They are forced together and then forced out into the middle of the alien wilderness where they have to survive and find out why they were taken there. This is a series with a lot of big mysteries, strange monsters, and a lot of cool stuff.

And then, starting in issue two, there’s a space monkey.

BCP: I was wondering about that.

JT: Yeah well you’ll just have to wait and see.

BCP: I’ve heard that this is the comic book you’ve always wanted yo write. Can you tell me about the influences that shaped this series?

JT: Right, it’s a mix of things; the series speaks to all the corners of my influences and all of that, and there is a bit of horror and horrific monsters. I like monsters that don’t quite make sense, contradictory monsters, so I’ll describe two or three animals and send it to Michael and see what he comes up with. And maybe one of them has eight arms, so it’s a lot of fun. I don’t want to show people what they’ve already seen over and over again, and we wanted to lean into the strangeness, and that’s why the series is so rich with pinks and purples and you see a lot of that and a lot of…

I almost started saying what I can’t say.

BCP: You’ve already mentioned horror. What are some of the things you can’t wait to put into this book?

It’s got horror and teen drama. It’s about a bunch of teenagers so it’s funny and fun, but it has a kind of adventurous Goonies-esque feel to it. But when the threats emerge, the threats are real. I wanted something that has fun and funny kid moments but when their hearts start to break with the weight of what’s happening I want the reader to feel that just as hard. It plays on all those fields simultaneously.

BCP: Are there any moments that you can talk about that hit close to home? Have you written a part of yourself into the story?

JT: Nothing directly, nothing that I’ve experienced… well actually no, all the characters are all based on me – or at least the different elements of myself – especially in high school. When Isaac first shows up in the book, he’s going to have to do stage crew again even though he’s auditioned for every single school play since he first started at school. He never gets into them and he wants to be a part of that world so badly,y but he just doesn’t fit into that world. That was me high school. I was the weird stage crew kid but I’m also the kind of character Adrian is in the series. I’m a weird blend of all those pieces together, which is why it’s so fun to write, basically I get to be a schizophrenic and let all the different aspects of my personality argue with one another.

BCP: That’s exciting to know since the press release broke down all the characters into their different archetypes.

JT: I didn’t set out to do all the archetypes, I wanted show characters working through the issues I had to work through as a teenager.

BCP: You worked with Scott Snyder on the Court of Owls, and I think I’ve yet to come off that high. So, can you complete the sentence, “Gotham City is…” in three words or less?

JT: I’d have to sit down with that. I can’t do it off the top of my head. I can give you six paragraphs on what Gotham is, but oh my God… three words? Here’s the aspect of Gotham I find really really interesting, it’s that it is the enemy that no one talks about. Gotham itself has tried to break Bruce more than any of the villains. The Joker in particular thinks “oh, Batman loves me, but is trying to stop me all the time”, and that’s kind of the same relationship Batman with Gotham. Bruce loves the city; he’s trying to fix it, but it keeps trying to destroy him. I find that it’s the most interesting relationship between a character and his city in all of comics – and all of fiction really.

BCP: Batman versus Superman is rumoured to be borrowing from The Dark Knight Returns. Is there a story you’d love to see on the silver screen?

JT: Oh wow… I’d would really love to see a real crime movie along the lines of The Long Halloween or something like that. Obviously, Dark Knight got very close to that, but I love that deep crime. And working on Batman Eternal you’ll see the influences of stories like that in there.

BCP: Thanks for taking the time to talk to us, James, and we’ll definitely be checking out The Woods when it arrives in May. 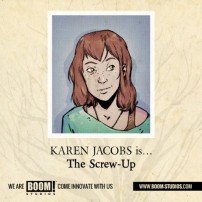