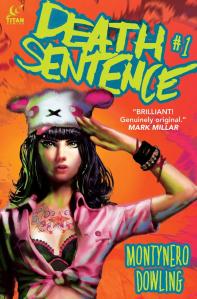 Finally. Finally i get a chance to read this series in its entirety! I first met Monty at Glasgow Comic Con last year where we interviewed him about his (then) up and coming series Death Sentence and from that moment on, I was hooked. After reading the first issue, however, I decided to wait until the series was collected before finishing it and I couldn’t be happier that I did.

The basic premise of the book is that there is an STD doing the rounds that grants people special powers. The kicker, however, is that it’s going to eventually kill you. No backsies, no cure, dead. It’s an interesting concept for sure. Do you take the gift of powers and use them wisely, knowing you’re going to be dead and try to do some good before you go? Or do you – since you know you’re going to die anyway – go off at the deep end and give in to your base instincts? It’s a situation that, ever since I heard about it, I’ve put some genuine thought into and can honestly say, hand on heart… I think I’d be a villain. It would be so much more fun to start with, and with the powers shown in the series (I’ll try not to delve into spoiler territory) you could definitely have some serious fun.

The first thing that jumps out at you from this trade is the sheer beauty of Nero’s Cover Art. A mix of clean line work with what appears to be digital colouring, it’s striking enough to draw you in with its interesting-looking character portraits and 90’s Ska band style lettering. Nero continues to shine inside the book with a writing style that is both inviting and vulgar (“where’s my crucifix?” being an early favourite) in just the right mix for a book that is, at it’s root, about an STD. There are certain characters that may seem familiar to some readers and, to be fair, the people that we’d assume they’re based on certainly would be the type to contract such a disease. Nero also seems to have got the perfect mix of giving just enough information to the audience, while holding enough back that you still have to think about what you’re reading about as opposed to just flicking through and looking at the pretty. It’s an odd thing to have a book that manages to stay intelligent and thought provoking, but at the same time having the sort of filthy humour that one would normally expect of of a book by Messers Ellis and Ennis. If Nero wasn’t on your radar before, between this and his recent X-men Annual, he damn sure better be now!

Mike Dowling on art duties manages to capture the essence of the story perfectly, letting it breathe when it has to with elaborate splash pages, but never interrupting the flow. You have to wonder if he was given direction from Nero (a talented artist in his own right). Dowling’s work really starts to come into its own around the second half of the second issue, where his use of colour when powers are being used makes them all the more “magical”. A special mention has to be made as well of *that* scene in the third issue. You know the one. Yes, that one.

Enough can’t be said when it comes to singing the praises of this creative team. They’ve created something truly special here, something perfectly encapsulated in itself that manages to give a grim look at an exaggerated version of society as well as clear point that drives home the idea of always creating and always expressing. If we don’t have the power to do that, then really, what’s the point?