The first two issues of And Then Emily Was Gone served as a fantastic case study into how best to build a sense of creeping dread. From John Lees’ measured, restrained storytelling approach to Iain Laurie’s inherently disturbing artwork, everything about those first two issues seemed intent on sucking you deeper and deeper into this dark, twisted version of Merksay Island and its shady inhabitants.

The story is pushed forwards here, albeit just a little, as Greg Hellinger and Fiona manage to obtain another lead in their quest for missing schoolgirl Emily from the unlikeliest of sources. We also get a chance to dig a little bit deeper into the lurking, ever-present threat of Bonnie Shaw, a menace who has been built up so spectacularly without really having to command much in the way of page space. It’s another skilfully paced issue, with writer John Lees maintaining perfect control of the story at all times, always managing to reveal just enough to keep us wanting more without over-playing his hand.

Iain Laurie’s artwork in the first two issues was undoubtedly of his usual high standard, but I always had the sense that he was perhaps holding back just a little in order to ensure that the story and the aforementioned sense of dread weren’t overshadowed by his trademark style. Well, Laurie fans can rejoice, because at around the halfway mark of this particular issue, the SICBA nominated artist takes the brakes off and proceeds to put together one of the most dizzyingly bizarre and utterly engaging dream sequences I’ve seen in any comicbook, complete with claustrophobic panel layouts, disturbing metaphorical imagery and lashings of the distinctive Laurie brand of grotesque.

The ‘Twin Peaks’ influence that has been present in previous issues really comes to the fore here, particularly in the aforementioned dream sequence and its bizarre memories, disturbing anthropomorphic conversations and – chillingly – another brief cameo by Bonnie Shaw himself. The final panel of this issue is also bound to illicit an eye-widening “wait… what?!” from pretty much anyone who reads it, making the wait until the fourth issue even more painful.

My only minor complaint with this issue comes as a result of my own selfish desire to find out more. Everything is mysterious at the moment – whispers of old wives tales, fleeting glances of the bizarre – I just want to know more! I want to know what the heck is going on, and I want to know now! Don’t get me wrong, the journey is definitely half the fun, and it’s undoubtedly a testament to the world that Lees and Laurie have created that I find myself so desperately craving a deeper understanding of every minute aspect of it, but with just two chapters left to go, I can’t help but find myself craving long issues and more and more pages of this utterly compelling slice of Lynchian horror.

Overall, this third issue of And Then Emily Was Gone sees us stumbling deeper and deeper down the rabbit hole into a dark, twisted nightmare. And, given what we’ve seen so far – as well as knowing full well just what these two creators are capable of – I can safely say that things are going to get a hell of a lot darker before all’s said and done. And I for one can’t wait. Highly, highly recommended.

And Then Emily Was Gone #3 made its advance debut at Glasgow Comic Con 2014 on the 5th and 6th of July, and will be available through ComixTribe later in the year.

You can also keep up to date on the latest news regarding this title via the official Visit Merksay blog. 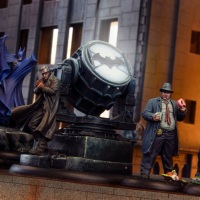