In a previous review, I lamented the resistance of returning Nu-Who to its original childlike roots. I should have bided my time until maybe after ‘Robot Of Sherwood’. An easy origin story(asking the assistant where he/she wants to go) Clara decides she wants to meet Robin Hood. Penned by Mark Gatiss, this episode is a stark contrast to his media labelled “dark humour”. It’s light and fun. Taking inspiration from David Niven’s ‘Robin’ we have an extremely jovial and light character. This does not sit well with our grumpy new Doctor – “and do people ever punch you in the face”. 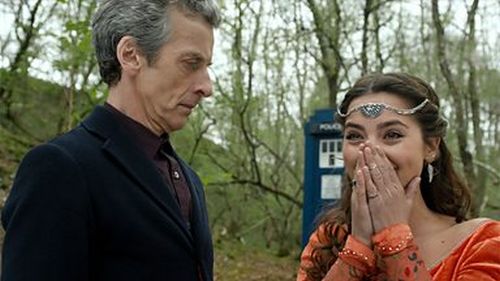 It’s always a massive risk invoking and involving characters from historical and mythical realms. You need to juggle fan expectations, former incarnations and Doctor Who fans(we are a tough crowd!). Gatiss has managed this effortlessly. A sharp, witty and downright good fun episode and a brilliant razor sharp script. It was a joy to watch Capaldi and Tom Riley – flawlessly portraying Robin Hood -go têt-a-têt in a ‘who gets the best line’ competition. Gatiss’ script was amazing. Simply as that. The episode will not possibly make it into people’s top 5 of all time but I envy anyone with kids watching it. That sort of event is great(I miss watching it with my nephews, they are too old and it’s not cool now). This episode encapsulates everything that is great with Doctor Who. Even Clara managed to talk to man and not flirt!

Capaldi again eh? Embodying every Doctor, McCoy will relish the spoon fight, and being generally brilliant. Taking himself very seriously and also acting more like an alien than previous incarnations, this Doctor is not to be messed with. I genuinely can’t get a groove on him, suss him out y’know? It’s refreshing and it’s down to a magnificent performance from Capaldi. Even with a potential banana skin thrown in, the ending had to be re-edited as the beheading scene was deemed distasteful due to events in the news, the episode still felt fairly fresh

In order to not turn this into a gushing fan review, there were minor faults with the episode. Ben Miller, as Sheriff Of Nottingham, was criminally underused – same fate as Michael Smiley last week. The ‘Merry Men’ were a needless tack on as was Maid Marion. Direction was competent, but given the unenviable task of following up Ben Wheatley, still felt like it was just ‘alright’.

That’s the crux of it. Three episodes in and there’s not been a lot to grumble about(apart from the usual grumbles but Doctor Who has never been perfect and it shouldn’t stop us striving for it). Also no Missy this week?……. Or was there?(there wasn’t!)

– Too many tacked on characters
– After being spoiled by amazing direction, this one felt OK

This piece was written by: