Radiant City, a futuristic New York type metropolis, built to fulfil the grandest aesthetic ideals. The city was built to positively enhance the mood of its inhabitants but this has been mysteriously corrupted and now this City of Tomorrow has succumbed to psychological disorders from simple schizophrenia to full-blown omniphobia. For those who don’t know (i.e. me), this is the fear of everything.

Crime and corruption abounds and one of Radiant City’s original creators, the mysterious Mister X, along with help of crime reporter Rosetta Stone, has returned in an attempt to repair his work and find some sort of salvation for himself and his city. All this and just in time for Christmas.

Razed opens with a bizarre spate of murders which seem to be focusing purely on the Jewish community. Rosetta Stone (herself from a Jewish background) narrates the story from the beginning, thus giving it that classic detective feel. The second story arc in the issue focuses on the ex-girlfriend of Mr X but uses a clever twist to link it to the previous story arc.

Motter reminds us that Radiant City is no ordinary city, it’s a bizarre mix of old school crime noir with the occasional robot chucked in, and the colour work in this issue is fantastic. The use of block colours and flashes of red gives it that oppressive dirty city appeal whilst fitting in with the Christmas theme. Comparisons to Sin City could be made here. The panelling is great and the story flows well.

The characters in Razed are likeable but nothing to write home about. The elusive Mr X pops into frame every now and then to save a life or solve a crime and then he slips “into the shadows and right off the page as usual

Personally, I wouldn’t run out to buy the next issue, but if crime noir is your genre then this is the comic for you. 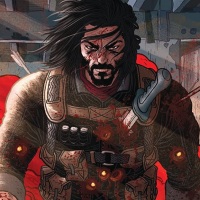