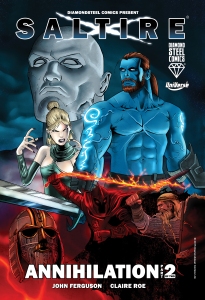 The concluding part of ‘Annihilation’ – the second chapter of Diamondsteel’s ongoing Saltire series of graphic novels – opens with the Scottish borders beset by the marauding Mercyan army. Following the events of the first chapter, where Vampire witch Ban Sith ran roughshod over the Scottish lowlands, the ancient guardians have united in defence of their lands, and now find themselves weakened as they face a united, supernaturally enhanced Saxon foe.

The crackling energy of its artwork undoubtedly remains Saltire’s strongest point, with artist Claire Roe providing a dynamic, visually engaging world with more than a few flashes of Rafael Albuquerque in her style – no bad thing, I’m sure you’ll agree. Lauren Knight adds depth with her colours, managing to avoid some of the rare occasions of harshness that we saw in part one. The character design is strong, and the frequent skirmishes are rendered with a fluid grace that manages to keep things flowing smoothly, even when the bodies and blades start flying. Saltire is a series that relies heavily on its visuals, with bold, larger-than-life characters and dramatic, emotional situations aplenty. Thankfully, the artistic team prove once again to be more than up to the task, tackling both the natural and the supernatural with grace and flair.

While part one of Annihilation suffered slightly from an almost overdevelopment of the lore, making the bombardment of character and place names a fairly daunting prospect at times, Ferguson reins things in considerably here, keeping the narrative tight and the cast of characters… well, if not small necessarily, then certainly familiar, to readers of part one at least.   His clear passion for this project pours out onto pretty much every page, and his grasp of the flow of the story seems to be improving book by book. Nothing is bloated here, nothing feels shoehorned in – everything has a purpose, and this is undoubtedly the strongest offering in the series so far.

One of my minor niggles about the previous books was the fact that, no matter how bad things seemed to get, there never really felt like there was any genuine threat. Vampires on the rampage? Have no fear, ‘Big Blue’ will dispatch them in a couple of panels. Vampire Guardians? Well, that might take three panels, maybe four. However, in this issue, with Saltire gripped in a (presumably supernatural) slumber during the opening pages, the sense of danger and uncertainty is finally given a chance to build. In fact, throughout the course of this chapter, things start to get bleak – and I mean really bleak. It’s a welcome shift in tone, and one that’s likely to draw the reader in far more than a supernatural blue-skinned warrior cleaving up baddies (even if that is still kinda cool).

Don’t get me wrong, ‘Scotland’s first superhero’ is a tremendous selling point, but the character himself remains fairly one-dimensional so far, almost like an early Superman whose near-invulnerability made him difficult for readers to really relate to. The supporting characters are far more intriguing at this point, and provide far more in the way of character development and genuine emotional investment than ‘Big Blue’ himself. However, Saltire’s relationship with the Oracle goes a long way towards remedying that, injecting the character with some much-needed humanity.

Overall, while its impact is going to be far greater from the point of view of Scots who finally have their own superhero to look up to, Saltire is still an engaging, dynamic slice of swords and sorcery fiction, and should appeal to readers all around the world. The creative team are coming together impressively, with the quality improving with every subsequent release, and while a knowledge of the previous chapters would certainly be a bonus, it’s certainly not a prerequisite at this point. Onwards and upwards for the team at Diamondsteel then, and I can’t wait to see where they take this renewed confidence next.

Saltire: Annihilation (part 2) makes it debut at DeeCon 2014 at the University of Dundee Union this weekend, and you can find our more about the event on their official site.

It will also be available shortly thereafter on the Diamondsteel Comics Online Store.