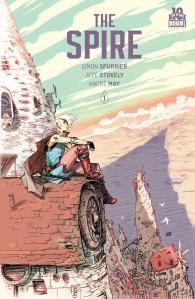 It’s rare these days that I’m really struck by the artwork of a book – one of the perks of being a comic reviewer is that you get to see a heck of a lot of great artwork, from the creepy, idiosyncratic stylings of Iain Laurie right through to the crisp, elegant work of Terry Dodson. But there’s a heck of a lot of uninteresting dreck in the middle ground, and after a while, one can lapse into the habit of looking through the art of any given book, to the script, the themes, anything.

It’s difficult to put my finger precisely on why I loved the art style of this book. It’s harsh to say, but it’s by no means technically excellent – occasionally wonky perspectives, characters whose jawlines change shape from panel to panel, frequently heavy-handed inking all abound. Rough-hewn would perhaps be the best way to describe it. And it’s absolutely gorgeous – like that badly-made bookshelf that you made in design technology class, that to this day holds books to its capacity. Or is that just me?

It’s the incredibly strong sense of place that Stokely successfully generates – the titular Spire feels like a real, weathered place, full of vibrant life, as well as gruesome death.

As much credit for this of course must go to writer Spurrier, who’s setting about laying the foundations of a fun murder-mystery, despite some occasional tonal sideswipes. Most enjoyable is his terrific naturalistic dialogue, given life by some wonderfully creative lettering from cruelly-omitted-from-cover-credit Wands. It’s not quite Arkham Asylum’s splatter of words on the art – stick with rather more traditional balloons and boxes – but it’s a wonderful example of just how much of an impact a letter who knows their shit can make.

Ultimately, it’s excellent to see such a fascinating world being built, driven forward by excellent creature design, a strong characterisation of an against-the-grain protagonist, and. And at 28 pages, it’s pretty great value for money. I’m already looking forward to the next issue.