As many comic fans are probably aware, this year marks the 75th anniversary of the most iconic comic villain of all time in The Joker. What you might not have known, is that he shares his birthday with another, perhaps lesser known character (at least in terms of his impact on popular culture) in Will Eisner’s The Spirit. Matt Wagner becomes the latest writer attempting to garner broader mainstream exposure for one of comic-dom’s most historically relevant characters.

Given Wagner’s track record in breathing life into Golden Age characters, he certainly appeared to be the perfect choice to bring The Spirit to a new audience, and the striking, beautifully drawn cover by Eric Powell had me imagining a character reborn with a realistic, modern edge that would enhance the noirish subject matter. However, I was disappointed to find the series has adopted a far lighter tone complete with expository old school dialogue, which reads much like a classic Golden Age strip.

Although Wagner is successful in capturing an authentic old-time flavour, it really feels like he passed up the chance to bring the character up to date. One anachronistic element in dire need of revision is Ebony White; the name attributed to a black character previously illustrated in a racially stereotypical manner. In fairness, completely changing the name is probably something Wagner has no control over, but he does his part to redress the balance by injecting some levity into the subject, and positioning ‘Aloysius’ as a prominent figure in the story whilst adding other positive minority characters.

Similar to tone of the writing, the art style chosen by Dan Schkade attempts to recapture the magic of Eisner’s original work, and whilst not quite on that level, the work is perfectly serviceable and flows nicely from cover to cover. The exaggerated nature of the cartoonish images is curiously contrasted by Brennan Wagner’s colour palette, which is fairly muted throughout, leaving the art looking a little flat at times.

Perhaps I set my level of expectation too high, but the opening issue of this new series was disappointing. A missed opportunity. 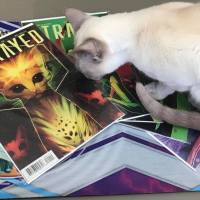