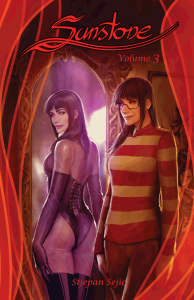 I’m not going to begin this review with the ubiquitous ‘this isn’t really what I’m into BUT…’ as firstly, it seems unnecessarily defensive and secondly – dear reader – because it’s none of your business. At the same time, I understand that this approach arises from the need to comfort the skittish reader who might be startled and scamper off at the first sign of a nipple clamp and reassure the general public that this comic isn’t just for those with an extensive latex collection. Volume #3 cleverly addresses the squeamish response to BDSM directly with Anne’s narrative – having Lisa explain the fetish life in a clear non-threatening way – although her inclusion in the scene does seem to be a little inevitable as frankly, the lady doth protest too much.

As much as Lisa and Ally’s tastes may tend towards the niche, the issues they confront in their relationship are the same ones that any new romance faces, everything from snoring to the dangers of possessiveness. Most relationships feature a power dynamic of some sort – not usually quite as set in stone – but things like personality types, levels of success, and hey, the fun variety of pre-existing societal inequalities all create an dissymmetry of some sort. Sunstone depicts BDSM as a way of playing with these power dynamics, by making them visible and theatrical, or subverting them completely. However, it can also add an additional layer of complication, as Ally anxiously finds when she looks to take their relationship to the next level.

There is much to love in Sunstone, whether you’re vanilla as they come or your desires are, uh, ‘unconventional’. There are moments where the comic goes full cheesecake – including a latex outfit montage – but these is framed as an indulgent embellishment that Lisa writes into her story, and makes complete sense to her character. The sex scenes are enough to make this reviewer blush to her toes – but are always lighthearted, heartfelt and contribute something to the narrative of Ally and Lisa’s developing romance. It’s a hugely sex-positive work, and some of the best moments are where Ally’s elaborate scenarios don’t quite go to plan, celebrating the awkward but lovely reality of a relationship. 50 Shades has much to apologise for, but it has at least created a culture where you can proudly consume smut on the train – so I urge you to boldly go, buy this book and go out into the world and read it. Extra points if you can do it without blushing.

The writer of this piece was: Kirsty Hunter
Kirsty Tweets from @kirstythehunter.