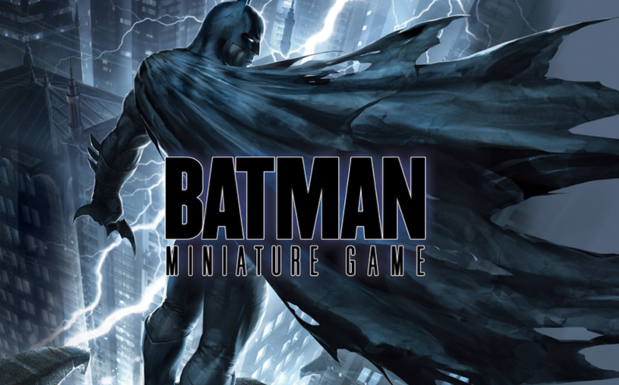 Continuing with today’s #BatmanDay celebrations, I’m going to take you through the Knight Models Batman Miniature Game.  So basically, this week we have a Battle Report – or Batrep – for you. Basically, it’s an amazing game – one of the best small scale skirmish games, or indeed 28-ish mm I’ve played. But how does is it play out of the book, and how easy is it as a novice?

We played the smallest version of the game, 150 points / $500. What does that translate to? Well, a boss character (leader or sidekick) runs at anywhere from half to most of that, a free agent (mercenaries) similar, and henchmen anywhere from 10-40. At this level, you’re talking 3-5 figures max – or, to put it another way, playable out of the box.

I decided to go Law. The game is about victory points and objectives, which ivy can’t really do at low values as her plants are static, so would need something mobile to compensate. It is arguably a disadvantage of the game that some boxes (Ivy and Riddler) are not great for the novice. A Batman is too pricey, so Law it was.

Jim Gordon is an elite boss for swat, so you can take more than one. Cue 2 swat, Alpha (pricey, big gun) and Echo (cheaper, melee). Swat are tough, but more important quick, so good for covering table. The downside? They cost $ as well as, so no extra gear for me.

To pair with Jim (at setup, you have to split your team in half), I went for the cheapest basic cop in the game, affectionately known as Fat Cop, basic guy with a baton.

We were up against Two Face, an expensive and heavy hitting boss, with two of his crew, a fast loony with an axe and a gun toting goon. Having fewer models is not necessarily a disadvantage as activation alternates – so you can pass, giving you a measure of control. On to setup. This is a game of busy urban boards; we decided to centre on Crazy Eddie’s Junkyard, and with our random furniture giving us each a lamppost and 2 sewer tokens, it started to come together. It’s always night in Gotham – you can only see 30cm unless something is within 10 cm of a lamppost – and you can move freely between sewer tokens. 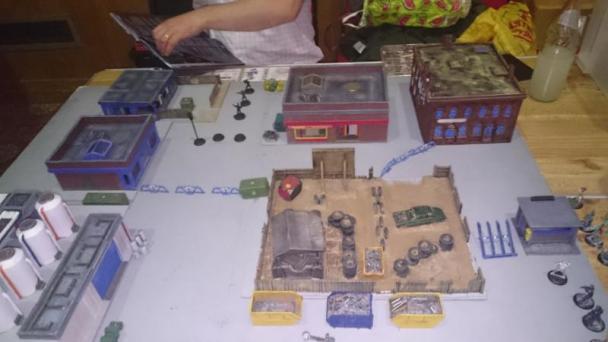 3 objectives each – Ammo and Titan (stat boost) for both of us, Loot in the centre from my opponent and from me a couple of Riddles down (they’re 2 for 1) – crazy Eddie’s dirty secrets and stash! You can use any but only your opponent’s are with points (usually). We were keen to see if the game felt sufficiently cinematic, and for scenario we got Patrol – opposite corners, a vp for first hit, 3 for ending in the opponent’s deployment. Time to play this!

Action economy is key to this game. You have a number of actions equal to your willpower – 5 on average – to distribute between move, Attack, defence and special. You can move 10cm but move counters give you d6 extra (or can be used to manipulate objects and objectives) , Attack counters let you attack (2 to use a range attack, at full rate of fire unless you moved) , defence let you block in melee. And special? Well, used for some abilities and things like opening sewers or running (double base move) are 1 move + 1 special.   A slow start though. Swat start to take position, cops head into the yard. Two Face crew split and spread out. 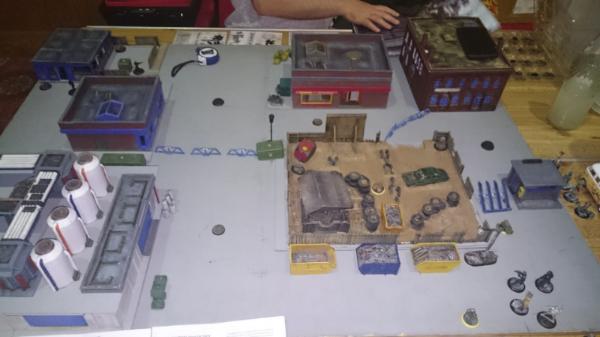 In any turn, you don’t know who’s going first – there’s an equal number of tokens in a bag and when it’s yours, you choose. We realised that in a 6 turn game (as scenario dictated) our board was a bit too wide. Cue more moving, but close enough for me to score a Vp from my opponent’s loot. 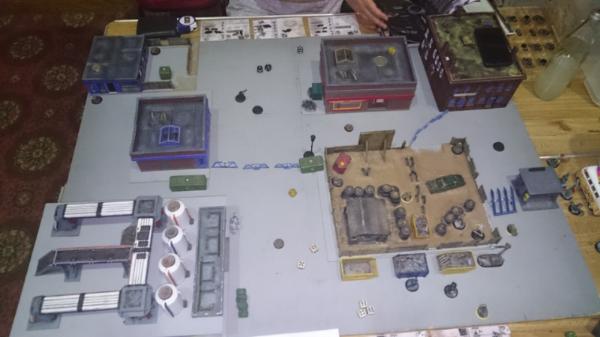 I get to go first, and immediately go for the riddle with Gordon. His Detective trait gives me +1 on attempts to solve riddle objectives (d6, on a 1 you lose a vp) – natural 6, it’s worth 3VP! Ultimately (spoilers!) this is what wins me the game. Detective is amazing, because it also allows you to negate a pass, which in a large crew is key. Gordon totally worth it.

This is also where things start getting messy. We’re up close and personal – but not close enough. Getting used to judging cm, not inch, distances is tricky! We both fail marvelously to shoot one another. His goon catches my swat guy though, diving from the rooftop but blocked by his body armour – still a vp. Next turn is going to be messy. Another vp to me for holding the bag! The axe goon, meanwhile, goes after the other riddle and rolls a 1, losing the vp. 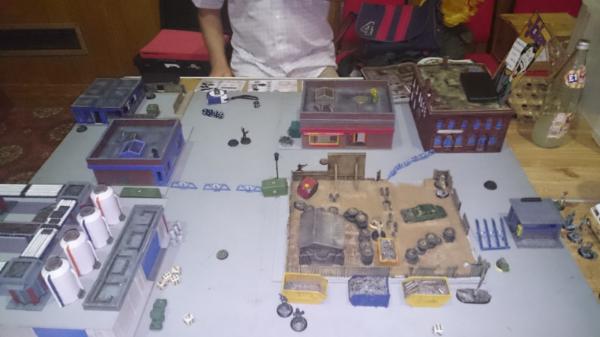 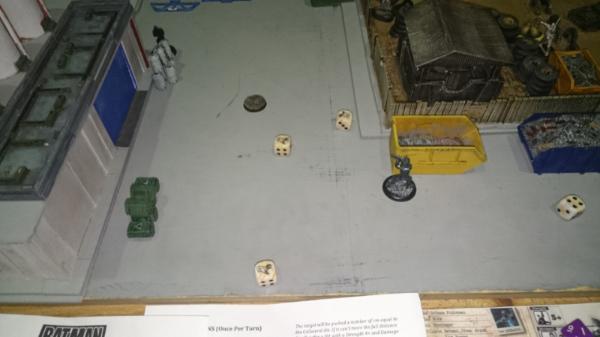 Serves me right for using my owl dice. That’s 3 1s right there. :facepalm:
Two Face moves up by the building, back up for his goon who dives in with the axe – and misses the cop, who I’ve loaded up with defence tokens.
Other swat guy goes for a sprint. Dives down the sewer – Rolls enough move!

I lose the draw. My swat guy gets shot and suffers for it. RUN AWAY! Totally throw Two Face by popping out of the sewer next to him, try to batter him but he’s tough! Gordon goes for a shot and misses, but swat’s not in the way so no chance of hitting him at least. Still Two Face is forced to punch him, not shoot Gordon. 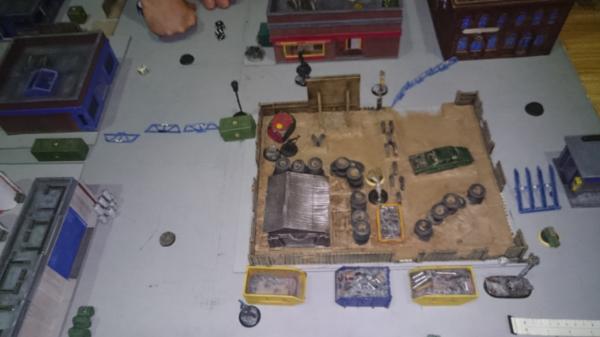 Two Face heads off – leader death is 6Vp, and he’s not taking the chance. Gordon pops one off at the axe guy. Not enough to finish him though. Uses his take cover! special to add an extra defence token over the cop’s defence 3 to 4, enough to save him, however. And then a Hail Mary pass – melee swat sprints for the enemy end zone, but rolling 5 cm extra move only left me just short. However, my opponent agreed that he didn’t see it coming and it was a gutsy move. 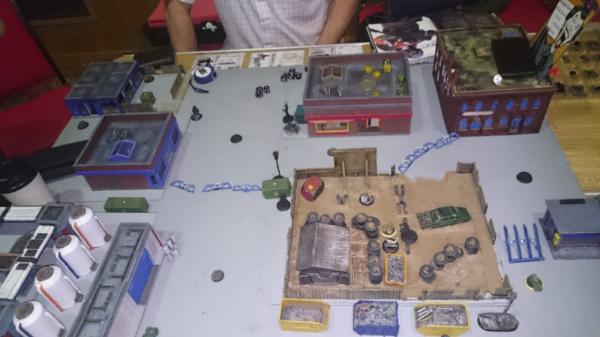 Overall – a complex, but not over complicated game. Once we had our heads round rolling equal or over, we got into the swing of it. Half an hour setup, including designing our board for the fun of it. Just over 2 hours to play, and with quick reference sheets handy surprisingly little checking of books. Very impressive, love it.

Is it accessible? Well, I tested it also on a novice gamer, and they were able to latch onto the basic concepts very quickly. Because every model has a unique reference card, it’s very visual, and that lends itself immediately to players of all levels of experience. And ultimately it’s a cinematic game – the characters play the way you imagine they should, and it’s like playing a comic. Can’t ask for more, really. 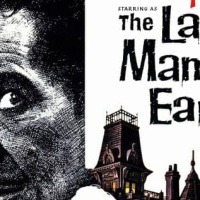 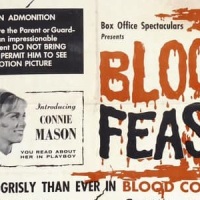 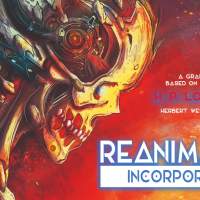 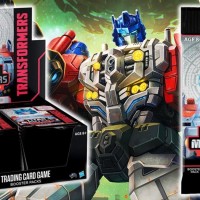