The very fact the the 26th of September now is recognised as Batman Day around the world, just goes to show what kind of world we live in now, and damn if it doesn’t make me smile. While we’ve already covered the main continuity of just who the man behind the cowl is here, we thought seeing as we’re celebrating the Caped Crusader, we’d take a look at the different iterations of the Bat, throughout the Multiverse.

First up we have Bruce, re-imagined as a Soviet Crusader, fighting against a tyrannical Communist Superman in Red Son. Written by Mark Millar, the mini series is widely regarded as one of the better Elseworld’s tale in recent years, giving us the story of “What if Superman landed in Soviet Russia instead of America. This is a Bats who is considerably more underground in his revenge against the Head of Police after becoming Russia’s Most Wanted. Still fuelled by the grief of his dead parents, instead of taking down criminals, this bats is hell-bent on bringing down the establishment. Unlike his Earth-1 counterpart, this Batman is perfectly willing to kill, if he believes it to be for the greater good. It’s also worth noting that due to the story being set in Russia, there’s a very good chance this ISN’T Bruce under the cowl, though the character backgrounds are similar. 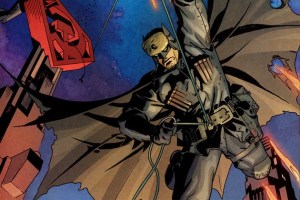 Keeping with the same theme, up next we have the Batman of Flashpoint, his really was a Batman that didn’t hold back, (SPOILERS ON FOR FLASHPOINT) fairly early on in the story we find out this Bats is actually Thomas Wayne, who takes the mantle after the death of his Son, Bruce. A Casino Tycoon by day, and an incredibly ruthless Batman by night, there’s guns, there’s the obligatory “dark” version of the costume, and actually a pretty cool take on the logo. Ultimately, Thomas turns out to be not such a bad guy, and helps Flash fix the timeline, but not before we get a sword thrown into the action as well. It’s a strange one when the Batman of Earth-1 is seen to be the most tame on the list, with his moral code and vanilla weaponry!

Speaking of Alternates of Batman being fairly brutal, there was also the Vampire Batman of Red Rain. 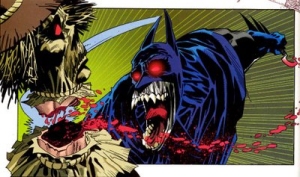 Forced to become a vampire, in order to fight Dracula. Yup, Batman becomes a Vampire. Seeing that it’s the only way to giant he strength to defeat Dracula, Batman gives in to his more bestial side, and by the end of the story, goes full Vamp. Not without making a rousing speech to Alfred about how Bruce Wayne may be dead but now Batman will live on forever… Ranked number 1 on almost any list of Elseworld’s tales, Red Rain spawned two sequels and is still thought to be one of the best Batman tales to date.

If “Dark” Batman was the most common theme used in the multiverse, then “Different time period” Batman is a very close second. From Gotham by Gaslight pitting the Dark Knight up against Jack the ripper, to Batman 1 Million being set far into the future, there’s a wide scale used for the Cape Crusader, lending claim to the fact that Batman will “Never Truly Die”.

In the middle of the two however, is a time period that has garnered somewhat of a cult following… The 60’s. It’s one that we keep going back to, from the Adam West/Burt Ward inspired Batman ’66 series, that follows the continuity of the original TV Show (the one with the POW and SMACKS), to Batman: Thrillerkiller, which is set in the 60’s also. Maybe it’s the bold colours, or the slightly more light-hearted tone, but something keeps drawing us back to this time period of the (Not So) Dark Knight’s career.

Sometimes, we’ve even had a Batman who isn’t even Batman, In the In Darkest Knight Story, we get a look at what could have happened if Bats became a Green Lantern.Based off of an Infinite Crisis Parallel Universe, Earth-32, Abin Sur finds Bruce instead of Hal Jordan and he is chosen to be the next GL of Sector 2814. Would’ve been interesting to see how this one played out in the long run, as personally, I’ve always seen Bruce as more of a Yellow Lantern than anything else; harnessing the power of Fear, but then I guess he does have extraordinary Willpower, so maybe I’m wrong.

That about sums up our trip into the alternate realities of the Bat, with so many more to choose from we could be here for a long, long time. I’ve not even mentioned the Batman of Earth-2, Batmite, the Batman featured in 666, Detective 27, Earth One, Golden Age, and so many others!

Maybe I’ll do a part two for next year…

Enjoy Batman day, and don’t forget to check out our other featured articles on all things Bat!