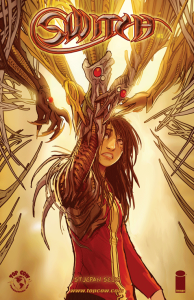 Switch sees Stjepan Sejic’s popular web comic brought to the printed page for the very first time.  Based loosely in the classic Top Cow Witchblade universe, this first issue introduces us to Mary, a teenage girl who finds herself ‘chosen’ by a mysterious gauntlet that grants her immense ancient powers.  While it isn’t necessarily a part of the existing Witchblade continuity, it does borrow heavily from the mythos, and features appearances from several familiar characters over the course of this opening issue.

Full disclosure, I’ve never really had much prior interest in Witchblade as a series, but Switch is exactly the kind of book I think I could really get my teeth into.  The web series built up an absolutely massive fan following on Sejic’s DeviantArt page, and based on this first issue, I can definitely see why.  Mary is a truly intriguing protagonist; an unconventional, UFO-loving heroine whose self-effacing rationale for the gauntlet choosing her in the first place – “you eat enough steak, and after a while you’ll find yourself craving a burger” – tells us pretty much everything we need to know about her.

It probably goes without saying to anyone who has seen Sejic’s work in the past, but this first issue looks absolutely gorgeous.  Bold, expressive characters and the familiar painterly vibe give the book a sense of energy, particularly during the frantic bursts of action that punctuate the impressive character development.  The design is impressive too, with eye-catching creatures, demons and supernatural warriors aplenty, not to mention the distinctively rendered ‘normal’ characters.

The story itself is being built up gradually, but the epic-scale world building on display by Sejic – featuring armies of angels and demons waging a millennia-spanning war – all but guarantees that this series is going to have legs for a long, long time.  For the time being, the Witchblade gauntlet’s link to its previous wearers gives this book enough of a hook for it to really grab the reader’s attention, and the double-lives of several otherwise regular high-schoolers gives the overall sense that nothing is as it seems.

Featuring a strong, well-rounded female protagonist and a truly intriguing backstory – not to mention that artwork – Switch is all but guaranteed to be another runaway success for both Sejic and Top Cow.  Definitely one to consider picking up this week, folks.  Millions of DeviantArt fans can’t be wrong.