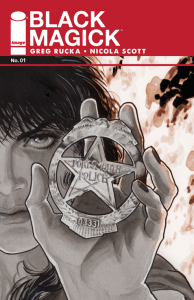 The prospect of a new Greg Rucka story is an exciting thing. Rucka found fame as writer and creator the hugely popular Lazarus series (also from Image) so I immediately jumped on this when I saw it in this week’s review list. When you pick up something new from a writer you already admire it’s with both a sense of trepidation and excitement for what is to come, and I’m pleased to say the Black Magick does not disappoint.

Sure, it starts off with a certain kitsch appeal as it plays to your stereotype image of a druidic solstice ceremony but, as you scan through the panels, you start to notice that Scott is being a little bit playful with the art. The branches strapped to one of the male coven member’s head to look like a Stag, the female coven members with their cowls open to show the naked body, even the chanted reply ‘so mote it be,’ seems to be just a little bit tongue-in-cheek, and then Rowan Blacks mobile starts to ring. ”Who the hell forgot to turn off their fucking phone?” snaps the coven lead. OK, there’s the hook, this isn’t going to be all fairies and sunshine, now I’m getting drawn in.

Our protagonist in this series in Rowan Black, Detective for the Portland Police Department, and practising Witch. At the start of the series Rowan is called into a hostage situation, in fact the hostage taker specifically asked for Rowan by name. Why would this person specifically want Rowan, and what is his motivation to do so? By the end of the issue both of these questions are answered – to a degree – and the baseline for the story is set, and yes, I do want to read issue two already.

Black Magick is a great first issue, and both Rucka and Scott have synced up well as a creative team here and created a story that combines realism and mysticism without having to overload the reader on the world of the craft as most readers are at least familiar with some folklore and can fill in any blanks. It’s also quite funny in places, both in story and in the art. Rowans partner is called Morgan (Morrigan anyone?), and when Rowan is forced to strip for the hostage taker to show if she has a wire then of course she is wearing striped socks. These are touches that I love – they are not laugh out loud funny, but the make you smile when you find them.

Ruckas script is flowing and subtle in a manner that immerses you quite without you being conscious of it, and the art of Scott is simply fabulous, it’s like a watercolour, but in black and white. Except of course when magic is being used and the object of that magic is painted with the most captivating of primary colours. The panel of Rowan’s face as she utters a spell to defend herself actually made me do a double take, it was that good. Black Magick is quite simply a beautifully crafted comic, and is something to be savoured, I’m really looking forward to finding out more about Rowan Black and her family of Witches.