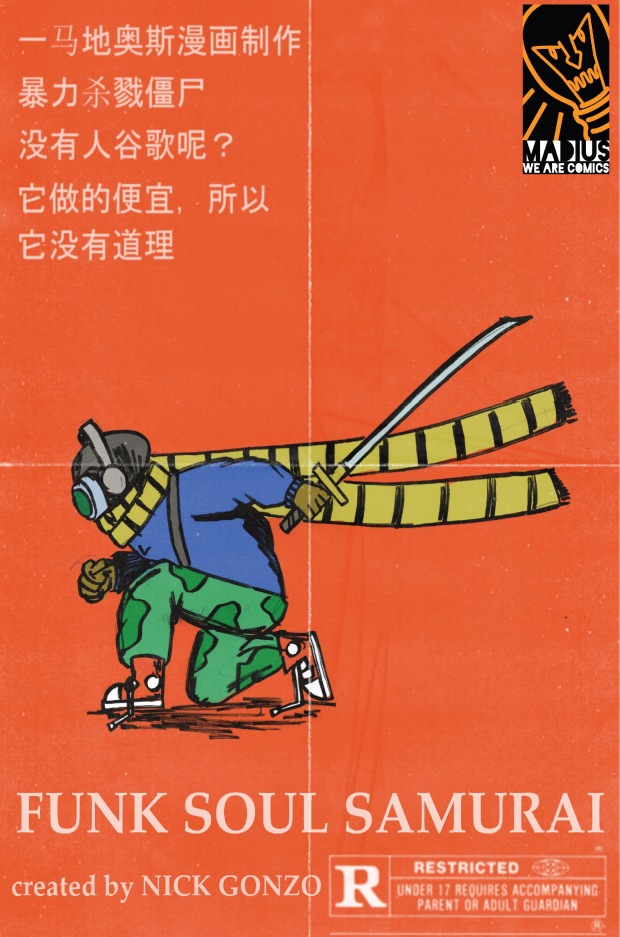 What the hell did I just read?

A lone samurai, wrapped up in goggles, cargo shorts and a Rupert the Bear-style scarf, wanders the desert.  On his journey, he stumbles across “Old Man Ellis’ Shakes”, and – presumably – fancies a milkshake.  However, before you can say “what the what?!”, he finds himself beset on all sides by zombies, monsters and other miscellaneous abominations.  So what does he do?  Well, he does the only thing any respectable Samurai could do in this situation – he cranks up his boombox, hops on his skateboard and proceeds to cut a swath through the undead hordes in a ballet of katana-wielding violence.

Funk Soul Samurai is undoubtedly Nick Gonzo’s most polished work yet, even if it isn’t actually all that polished.  That said, there’s something about his scratchy, uneven style that really catches the eye, and while it’s definitely an unconventional approach that won’t necessarily appeal to everyone, there’s a real edge to his artwork that’s difficult not to be drawn in by.  The colours are, like everything else in this comic, completely lacking in subtlety, providing a vibrant assault on the senses and an in-your-face music video aesthetic where you can almost hear the booming soundtrack as our eponymous hero does his thang.

Seriously, after reading this latest offering, I’ve come to a conclusion; either Nick Gonzo is a unbridled creative genius that the world as a whole isn’t quite ready for yet, or he’s certifiably insane.  At this stage, I’m not sure which one I’d put money on.  Either way, there’s no denying that Funk Soul Samurai is like nothing else you’re likely to pick up any time soon, and serves as yet another utterly unique addition to the Madius Comics back catalogue.

Feeling like a gritty, ‘zine version of Geof Darrow’s Shaolin Cowboy, Funk Soul Samurai grabs you by the collar and dares you to keep your eyes open as it drags you through eighteen pages of retina-scorching, sword-swinging, milkshake-slurping insanity.   It’s definitely not going to be to everyone’s tastes, and I’m still not sure what the hell to make of it myself, but the one thing I know for sure is that the world is a better place with comics like this in it.

Funk Soul Samurai will be available from November 14th at the Thought Bubble Sequential Arts Festival in Leeds, UK, then available from the Madius Bigcartel shortly thereafter. 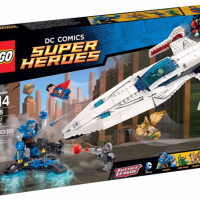