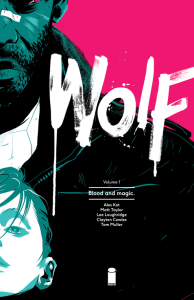 Antoine Wolf is a paranormal investigator who just happens to be immortal, yet he’s sick of life and wants to die as soon as he gets the chance. However, with his relative Duane locked up in prison, Wolf can’t leave this earthly plane quite yet. But when an opportunity arises to do a job with the powerful Sterling Gibson in exchange Duane’s freedom, he accepts it against his better judgement. This leads to him meeting the orphaned Anita, who may very well be the antichrist; her parents wanted to sacrifice her, and she talks to the ghost of her grandmother. The girl is undergoing an awkward adolescence to say the least. However, all of this connects to a bigger plan of Apocalyptic scale and Wolf must get to the bottom of it. Los Angeles is going to Hell. Literally.

There is a hell (no pun intended) of a lot going on in Wolf all at once and it might take a while for you wrap your head around it. It certainly isn’t a story short on ideas, but the plethora of sub-plots and characters can be overwhelming initially. However, bear with it; when the dots start connecting it flows naturally, taking you deep into Los Angeles’ supernatural underbelly where vampires, ghouls, squid monsters and racists dwell. As the plot unravels, Wolf enters a world that feels more like a bear trap; something bad is about to happen and when it does is only a matter of time.

The artwork is exquisite, and really makes the city feel like a secondary character in its own right. Panels featuring the sun setting over the hills transport you into Californian dusk, while there are scenes of spiritual, ethereal beauty which can be marvelled in, while also serving as a reminder that true horror lurks at all times. It’s very dreamlike and surreal, and one of the most beautiful nightmares put to page in recent memory.

Wolf is an outstanding series, and once it finds its feet it’s utterly captivating. And the best part is that it has the potential to get so much better. It’s not quite perfect yet, but it’s certainly headed in that direction.