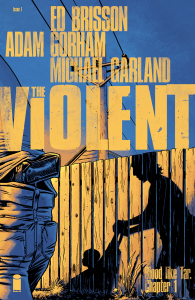 The Violent is grim. From the gloomy art to the down-on-their-luck characters and their individual situations, this is bleak stuff and it doesn’t make for pleasant reading. However, that doesn’t mean you shouldn’t read it – it is off to a promising start, but just don’t expect to come away from it feeling joy, optimism or thinking happy thoughts.

Mason is an ex-con trying to give up his old ways and live a normal life for the sake of his wife and daughter. But living in poverty and struggling to make ends meet means that giving up old habits isn’t easy, and the temptation to return to a life of crime is always there. Furthermore, his wife is a former drug addict trying to keep it together but for whom, like Mason, the temptation to return to old ways is always bubbling under the surface – especially when her former dealer shows up at her work offering her freebies. With both parents working dead end jobs, struggling to pay their bills and risking falling back into old ways, it is only a matter of time before that proverbial poop hits the fan.

Needless to say, things ain’t easy like a Sunday morning for Mason and his family. But it’s about to get a whole lot worse, and some poor decision making despite good intentions risks breaking their family up for good. In this issue, we see a hopeless situation turn to potentially devastating one for everyone involved.

Like I said earlier, this issue is grim and it lays the foundations for a series you just know is going to drag you into the belly of the beast. It isn’t an easy experience to throw yourself into a world so devoid of hope, especially when every character is firmly grounded in reality, making them utterly relatable in one way or another. You’ll sympathise with them, and reading about their plight will make any small problems you might have in your own life seem insignificant; especially knowing that there are people out there experiencing a similar situation to the characters in this comic book.

The Violent is off to an impressive start, but it’s a depressing experience. However, if you’re the type of person who likes to watch Ken Loach films, you’ll probably appreciate it. Reading it could potentially ruin your day, but it’s an important and emotionally charged story that deserves to be told.