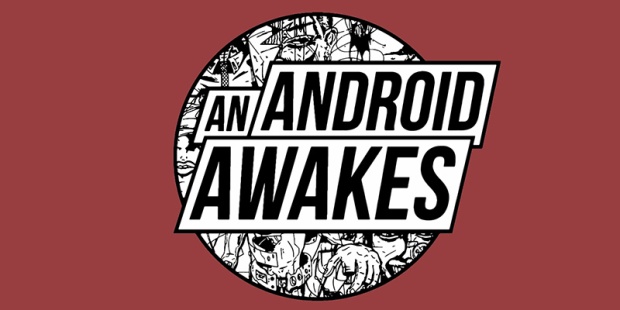 The brainchild of writer Mike French and artist Karl Brown, An Android Awakes is a truly unique offering.  Not quite a novel, not quite a comic, but rather something in-between, this boldly ambitious release introduces us to Android Writer PD121928, an automated writing robot who has just fourteen attempts left to get one of his stories accepted by the Android Publishing Program before he is deactivated.

The sheer creativity of the framing device for what is essentially a collection of short stories cannot be understated, and PD121928’s repeated attempts to refine the characters and ideas from his own automated subconscious makes for truly compelling reading.  Essentially this is a prose collection, albeit one peppered with eye-catching black and white illustrations, and French’s writing remains strong and inventive throughout.

The stories are superficially unrelated, although as you make your way through the book, some of the recurring themes, character names and storyline beats become more and more apparent.  The tone of the stories vary throughout the course of the book, as, somewhat inevitably, does their quality.  It bears mentioning though that even the ‘lesser’ of the stories are still interesting in their own way, and French should definitely be applauded for the sheer outpouring of creativity contained within these pages.

Artistically, Brown’s illustrations add immeasurably to several of the stories, providing an intriguing visual counterpoint French’s words.  As with the tales themselves they do also vary in quality, with several of them appearing a little too rough and unfinished for my personal tastes, particularly when compared to the more polished offerings in other stories.  Overall though, the illustrations and the prose work exceedingly well together, creating a deeply engrossing reading experience.

It’s almost impossible not to find yourself becoming drawn deeper and deeper into PD121928’s plight as he battles through rejections, anxiety and writer’s block, and there’s an offbeat sense of humour to some of the prose that feels vaguely reminiscent of Douglas Adams’ The Hitchhiker’s Guide To The Galaxy, albeit with a slightly darker, slightly more twisted 2000AD-style feel.  Overall then, while it’s not necessarily a ‘comic’ in the truest sense of the word, An Android Awakes is a boundlessly creative, proudly eccentric read that will have you hooked until the final page. Definitely well worth a look.

An Android Awakes is available from Amazon, in both printed and digital formats.