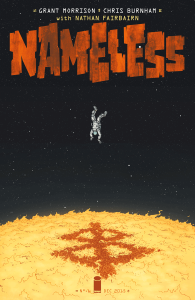 Nameless not only brings us horror in space, it also delves into the horrors of the mind. The title refers to the main character, who is an expert in the occult and who also happens to be a brash talking Scot (evidently influenced by Glasgow-born writer Grant Morrison) that has renounced his name so that no other creature can hold power over him. Nameless is thus a quintessential, reluctant anti-hero battling powerful forces, much in the vein of Constantine, and his curses and curt manner provide some much-needed and genuinely humorous pauses in what is a very dark, complex story.

The science-fiction elements blend perfectly with the horror; ancient beings from another dimension are crossing over into ours both physically and psychologically and Nameless, part of the group that opened the door, encounters a wonderfully manipulated version of Christian religion, science and history that is coded with Enochian symbols. We are thus presented with several scenarios, some parallel, some taking place in the past and the future, as Nameless navigates us through his invaded mind.

Nameless is splintered storytelling at its best, as can be expected from Morrison and his previous non-linear works. There are twists at every turn, and Morrison weaves the many layers of the story together into a truly mind-bending and complex tale, ensuring that the reader is constantly working to piece together the story, which also allows the reader to interpret the fractured plot in a variety of ways.

Chris Burnham has visualised the fantastical world superbly, with detailed pencilling that subtly differs in style throughout the segments of the story. This nuanced detail very much aids the interpretation of the comic, as does the colouring from Nathan Fairbairn, who uses different colour schemes to differentiate between different times, memories and worlds within the mind of Nameless.

Nameless is psychological, horrific and incredibly complex in terms of Morrison’s layered plot, which is beautifully enhanced by Burnham’s art and Fairbairn’s colouring. The overall package is a lot of detail for the reader to process in one sitting, which makes for a very re-readable series.