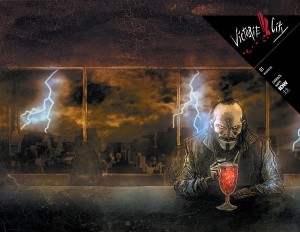 The first issue of Victorie City, the debut comic book offering from 44FLOOD member Keith Carmack, introduces us to two distinctive characters;  second-generation cop Hektor Ness, who finds himself struggling to fit in with the corrupt world of bribes and back-handers he finds himself inhabiting; and an as-yet-unnamed serial killer who is cutting a swath through the citizens of Victorie City.  Presenting itself as a hard-boiled detective story, this first issue lays out the backdrop for the series impressively, and gives us a firm grasp of the key traits of our two lead characters as their paths rapidly converge.

While the idea itself isn’t particularly revolutionary, and in fact borrows fairly heavily from several well-worn tropes, it’s the execution of the concept that is keeping Victorie City’s head above water for the time being.  Ness is a strong, easily relatable character with something of a young Jim Gordon in him as he rails against the established culture of corruption in the police department, while the killer’s haunting words and utterly chilling actions immediately grab the reader by the lapels and force them to pay attention.

While it’s likely to be something of an acquired taste, Vincent Nappi’s scratchy, erratic artwork works well to give the book a truly distinctive aesthetic.  Almost frenzied at times, particularly during the crimson-flecked pages featuring the killer, the presentation of the book almost feels like the crazed, stream-of-consciousness journals of “John Doe” in Se7en, albeit in a comic book format.  Occasionally it becomes a little too rough for my tastes however, with several dense, hard to follow panels along the way.  The lettering, provided here by Jessi Adrignola, is also fairly uneven and untidy in places, and while it perhaps wouldn’t look out of place in an edgy, photocopied ‘zine, it doesn’t quite fit in this particular setting.

Minor niggles aside, this is still a solid first issue, although it’ll be interesting to see how the story plays out over the rest of the four-part series to hopefully avoid it falling into the realms of cliché.  Carmack’s sheer passion for the project gives me a lot of hope, however, and the intriguing and captivating nature of the mysterious serial killer is going to make picking up the second issue an absolute necessity for me.  Dark, grimy and possessing a truly unique visual style, Victorie City has the potential to be something truly special.  Count me in for the rest of the series, anyway.

If you want to find out a little more about Victorie City, check out my recent interview with series writer Keith Carmack by CLICKING HERE. 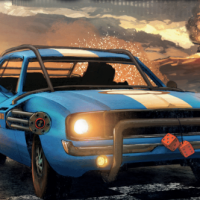 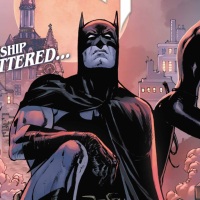 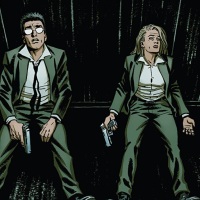