In the second of our comicbook movie retrospectives, Martin takes a look at The Shadow from 1994, based on William B Gibson’s iconic pulp hero and starring Alec Baldwin.

In the long box of comic-book movie history, there are many hidden or under-appreciated gems awaiting discovery. One such gem is The Shadow directed by Russell Mulcahy (Highlander), an action adventure romp based on William B Gibson’s pulp comic character created in 1931. Released in 1994 to less than favourable reviews by critics, it has since gained a cult following through various home media.

The story opens somewhere in the mountains of Tibet, where we meet Ying Ko (the eagle’s beak), a savage and morally reprehensible warlord and opium trader. In actuality Ying Ko is the assumed title of Lamont Cranston, a World War I veteran lost in the darkened maze of his fractured psyche; a state of mind presumably triggered by experiences of the Great War. The environment Cranston has chosen to inhabit is darkly alluring, awash with a hedonistic blend of debauchery and brutality. Ultimately, it is a fragile, hallucinatory construct which is suddenly shattered when he is kidnapped by servants of the Tulku, a Tibetan Mystic who possesses supernatural psychic powers. The Tulku offers Cranston a chance to regain his humanity, a path of higher purpose leading to possible redemption. At first resistant to accepting a forcible straightening of his moral compass, Cranston accedes to the Tulku’s wisdom. He spends the next seven years under the Tulku’s tutelage learning a form of psychic hypnosis enabling him to ‘cloud men’s minds’, leaving all but his shadow visible. Upon his return to New York Cranston is a man forever changed. He embarks on a crusade against the criminals and corrupt of the city as supernatural avenger: The Shadow!

Cranston conceals his vigilante alter-ego beneath the guise of a foppish millionaire playboy and socialite employing his psychic powers to project an illusory visage to further protect his anonymity. He is ably assisted in his quest by a vast, secretive network of spies and couriers consisting of several members of the public, every one of whom are indebted to The Shadow. Each of this select group bear a symbolic ruby ring, which flares bright red when their assistance is required. Romantic interest comes in the shape of Margot Lane, a latent telepath not fully aware of her potential, whom he is unable to influence psychically, and who consequently presents a threat to his secret identity. The Shadow must save the city from the evil machinations of arch-nemesis Shiwan Khan, another former student of the Tulku and the last remaining descendant of Genghis Khan, after he is accidentally revived from his centuries old slumber. He awakens seeking to dominate the world as his notorious forebear had once attempted. Utilising a more scientific method, he turns to modern science in an attempt to weaponise bronzium, a highly volatile element capable of levelling a city, to create a doomsday device that will destroy New York. Can the Shadow prevent the impending global apocalypse?

Stylistically, The Shadow is a by the numbers action adventure, but Mulachy fashions an expressionistic, richly detailed, darkly intriguing canvas and the characters who inhabit this world are drawn big and bold, much in keeping with the nature of the source material. Set in the depression era, the tone of the movie is informed by a Film Noir sensibility punctuated by Art Deco accoutrements. The majority of scenes take place at night or in low light and are shot using some clever directional lighting to create a convincing noirish ambiance. Exterior shots are augmented by digital mattes and CGI, lending a genuine sense of scale to effectively engineer fantastical but believable cityscapes, helping ground the film in a sort of hyper-reality. Other nice visual touches include a couple of sweeping model shots, clearly inspired by Burton’s Batman, which are nicely constructed and well executed.

The only minor criticism on the production front would be the lack of grime or grunge on the city sets. They look a little too clean for a depression era setting with the effect that some sets feel sterile, making them look fake. Conversely, there are a few sets which stand out, the ‘information hub’ and the ‘Shadow’s computer’ sets are both great examples of retro futurism. Costume designer Bob Ringwood brings his considerable experience to bear (having worked on both Batman and Batman Returns), creating authentic looking attire for the period, particularly the lead costume, which is a faithful reproduction of the original character design.

As with most action adventure films, continual exposition via the script assists in removing any thought from the equation, preventing it from becoming bogged down in the morass of character development, or meaningful overarching themes. *wink* The plot follows typical genre tropes, although there are brief hints at more meaningful underlying themes: redemption, the dark side of man, the psychological effects of war, scientific breakthroughs inverted for militaristic purpose, and the hypnotic power of mass marketing. Unfortunately, any attempt to flesh these themes out seems forced and ultimately pointless. The script is littered with excessive throwaway dialogue, in particular there are a litany of redundant, poorly delivered one liners, symptomatic of a script feverishly attempting to cover all bases. Indeed, there is an abundance of hyperbolic ‘comic-book’ dialogue, which is formulaic and certainly not realistic in tone, but given the source material this is to be expected. The comedic elements, however, are completely unnecessary and add nothing to the overall feel.

The central performances are solid, and Baldwin is a nice fit for the lead, effortlessly shifting between multiple personae. He is in pretty good physical shape – now a pre-requisite for superhero movies – and he handles the action scenes nicely. His opposing number, John Lone is a textbook comic-book villain, clearly enjoying himself in a thoroughly outlandish performance. Penelope Anne Miller is believable if a little bland as Margot Lane, but some of her line delivery is pretty poor, hindered though she is by a weak script. Now considered a heavyweight in the genre thanks to his work in the Lord of the Rings and X-Men franchises, Sir Ian McKellan pops up as atomic scientist, Reinhardt Lane, unfortunately sporting a pretty awful American accent; definitely not his finest hour. Tim Curry is a peripheral figure, but shamelessly chews on the scenery at any given opportunity. Peter Boyle is dependable as always, but a little underused, and could perhaps have lent gravitas in a fuller role.

The action is bolstered by a rousing classical score by Jerry Goldsmith, a master of the art, who has created some iconic scores over the course of his long and illustrious career. The music blends seamlessly with the action and never feels out of place. In keeping with the film’s setting and tone Goldsmith also employs rarely used classical movie music tropes, such as Mickey-Mousing (where the music mimics the on-screen action), in addition to more typical formal elements: e.g. recurring Wagnerian motifs to denote characters and places.

The Shadow is a very clearly a product of a Hollywood studio attempting to cash in on a burgeoning bandwagon before its wheels come off. The film has its flaws, but this is not Citizen Kane, The Shadow makes no attempt at pretension and is unapologetically great fun, so kick off your shoes, grab some popcorn and see what evil lurks in the hearts of men. 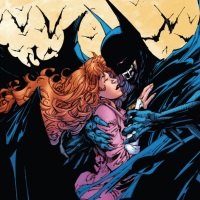