While there were definitely a few niggles to be had throughout the two-day convention, let’s start with the positives.  Firstly, the vast majority of the guests were incredibly friendly, gracious and more than willing to chat with attendees. While I was doing my fair share of zipping around between panels and tables over the course of the weekend, there seemed to be a mainly laid-back vibe to be had, with a lot of casual chatting, photographs being taken and plenty of smiling faces from guests and punters alike.

I didn’t have a huge amount of time to chat with many of the guests, but two names in particular deserve to be singled out. Firstly, acclaimed inker Scott Williams who was fantastic throughout the weekend, and who I actually commissioned the latest in my long line of Swamp Thing sketches from in the lead-up to the event. Scott was excited to chat about Swamp Thing, his favourite Swamp Thing “version” (like me, he’s a Wrightson/Wein guy), his love of collecting original art and his excitement at finally getting a chance to draw the iconic character, and while I’m always conscious about taking up too much of a guest’s time (particularly when there’s a massive queue waiting behind me), he kept things relaxed and involved throughout, even taking time to pose for a quick snap alongside colourist Alex Sinclair.  It’s also worth noting that Scott’s panel about inking was one of the most interesting of the entire weekend (for me, at least), helped immeasurably by the fact that is was in Panel Room 3, meaning we could actually hear what he was saying… but I’ll get to that later.

Secondly, Michael Dialynas (The Woods, TMNT) was an absolute gent, chatting at length about his career, his upcoming projects and his overall convention experience, even showing me a quick glimpse at his upcoming work on Gotham Academy. Michael’s table in Artist Alley had a slightly less daunting queue than Williams’, so I felt far more relaxed about shooting the breeze with the Greek artist, and – as I’m prone to doing – commissioning a sketch from him. Casey Jones, this time (not Swamp Thing! *gasp*)

The panels throughout the weekend were of an impressive variety, and I managed to attend a fair few of them, from Esad Ribic, CB Cebulski and Mike Zeck chatting about Captain America to David Aja, Marc Laming, Ducan Fegredo and Marv Wolfman discussing the different nuances of sequential storytelling.  While these panels were energetic and informative, they were unfortunately marred throughout by recurring PA problems, often to the obvious frustration of the hosts and panelists themselves.  Guests couldn’t hear questions being asked by the audience due to feedback and echoes caused by the cavernous Excel hall, and were also frequently interrupted by loud, repetitive announcements over the PA system about other panels that were due to start.  While the issues with the size of the venue are difficult to resolve, a toning back of the frequency of the other PA announcements might be wise in the future, as they almost completely derailed the aforementioned “sequential storytelling” panel.

One of the things that has always blown me away about LSCC – even if it isn’t necessarily my “thing” – is the incredible quality and variety of Cosplay on display. While you’re always going to get the occasional Harley Quinn or Deadpool at pretty much anything comic-related, the Cosplayers at LSCC take things to a whole new level with some truly jaw-dropping efforts. I always feel a bit awkward about asking to snap photos of people with an iPhone when there are other more professional photographers with light rigs and “proper” cameras, so I tend to lurk in the background for the most part, soaking in all it.

What I will say though is that if you’re interested in Cosplay yourself, or just like checking out photographs of some amazing costumes, I highly recommend joining the unofficial LSCC & Beyond Facebook Group, which has a fantastic community spirit and all the Cosplay photographs and discussions you could ever hope for.

It wasn’t all positive from the Cosplay side of things however, mainly due the fact that there were at least two other events being held in adjacent halls over the two days, leading to a somewhat cramped and stressful experience for anyone wanting to pop out and grab a snack. I’ve also hear some pretty sickening accounts of harassment, perving and negative, abusive comments directed at LSCC Cosplayers from attendees at the other events – the Classic Car Show in particular.  Obviously LSCC can’t necessarily be held responsible for the actions of a few individuals, but perhaps some more awareness, signage (“Cosplay isn’t consent” banners, for instance) and a higher level of presence by LSCC staff and volunteers could have helped reduce this.

Another complaint I heard on several occasions was as a result of the rising instance of guests charging for signatures.  While again this isn’t necessarily the fault of the LSCC organisers themselves, I did hear a lot of grumbling and anger from attendees (particularly parents) about the signing fees.  This was exacerbated somewhat by the fact that these fees weren’t always made clear until the person had made it to the front of the queue, having already given up around 30-45 minutes of their time for what they thought would be a free experience.  While I understand that it’s entirely at the discretion of the guests themselves, perhaps a little more clarity in terms of signage in future to inform people of the charges might have prevented some people from wasting time unnecessarily. 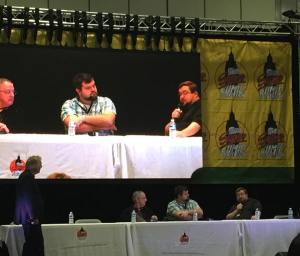 Overall though, I want to stress that in spite of these issues LSCC remains one of the absolute highlights of the British convention scene, with a world-class guest list and some of the smoothest organisation in terms of queuing and ticketing that I’ve seen.

A truly fantastic weekend from start to finish, and while the event was a little quieter than it had been in recent years – mainly due, one would assume, to the Walking Dead-themed “Walker Stalker Con” that was happening on the same weekend in London – from my perspective it actually enhanced the experience, with less claustrophobic crowds and far shorter queues for the most part.  Quite whether the various vendors and creators in attendance who rely in footfall to make money will share my thoughts is another thing entirely, but one thing’s for sure, you can count on Team BCP being back once again for LSCC 2017.

For more of our coverage and snaps from the event, make sure to check out the Big Comic Page Instagram account.