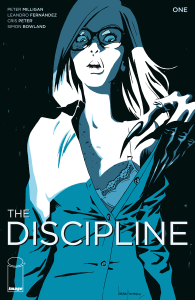 When I started this comic I was really hopeful of something a bit special, a bit different. I knew that it had previously been the property of Vertigo, but was now to be released by Image. I think I know why: 50 Shades of Grey. The hype surrounding that series makes it practically impossible for anyone not to make a leap there from The Discipline. Don’t get me wrong, I have never, nor will I ever read those books. However, with all the media hype surrounding the publications and subsequent film, it’s nearly impossible not to make the association from The Discipline to that movie/book. It’s unavoidable, completely unfair, and only time will tell if this title can outlast this unfortunate moniker.

This is, after all, in it’s essence (at least in the beginning), a story of a bored housewife who is seduced by a mysterious stranger. The onus of the story is very much on sex, specifically Orlando grooming Melissa for a purpose. In fact, the story opens on the moment of surrender by Melissa to Orlando as she joins him in The Discipline, and we get a quick taste of the metamorphosis that this entails. Having had that sharp taste of what is to come, the story then jumps back to just before Orlando and Melissa first meet.

This then serves the purpose of filling in the backstory for Melissa: a poor girl that married a rich husband who has no interest in her. Shunned by her husband emotionally and her family socially she feels set apart and alone. Orlando notices her and stalks her in a predatory manner, and Melissa, starved of attention, welcomes the chase. Can you see the parallels with the E L James story here? Can you understand the inhernt problem so far?

It does break though, as there is a strong supernatural/horror element to it, and it  all has something to do with “The Discipline”. It’s mentioned several times throughout this issue, but we don’t actually know what “it” is. There is some intrigue there, especially around who (or what) Orlando is, and who he is subordinate to. There appears to be some kind of meta-physical war and the sect Orlando belongs to is losing and needs Melissa, or the potential of what she can do/can become, but it’s only alluded to in this first issue and we don’t actually know what is happening.

The strongest element of The Discipline, without question, is the artwork. Leandro Fernandez has a crisp and clean style that is well complimented by an impressive use of shadow. Block shadow, there is so much of it that you would think it would overpower the page, but in fact it only serves to make the line work sharper. The style is quite individual, and I have to admit to liking it – even admiring it – a great deal. This particular style of inking has been quite ingeniously coloured by Chris Peter. By choosing perhaps four to six colours to use per panel there is no gradient work in the colour at all, but the line and shading work of Fernandez sort of make your brain fill in those blanks. I didn’t even notice it until I examined the comic closely wondering how to critique it, and when that particular penny dropped. Well, mind = blown.

Overall, in spite of the artwork, I have to admit that I was not blown away by The Discipline. I do believe a portion of that is because no matter how many times I tell myself it has nothing to do with it, I can’t stop associating it with 50 Shades of Grey, and I’m fully aware that is a failing on my part. However, I believe if I have trouble reconciling with that, then others will too.

Looking past that, there are some intriguing elements to the story, but I don’t think what has been shown in this first issue is juicy enough to completely hook the reader. I’m not sure that if I had purchased part one that I would absolutely purchase part two. Perhaps as a throwaway buy, to see some more of the art and if the story gets better through morbid curiosity. It’s an unfortunate side effect of today’s generation that if something doesn’t grip you immediately it’s generally discarded, I fear that – unless part two is something sensational – that The Discipline may fall by the wayside.