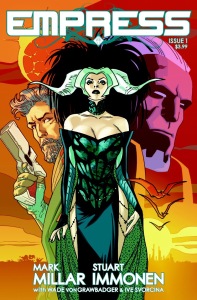 When I read the first back pages of Empress in the back of the latest Millar creation, Huck (#3) I thought to myself… this looks good. This looks very good. So when I was given an opportunity to take an advance look at the first two issues, I  said yeah. Sure. Why not? I’ve got an hour spare to review this. Of course, inside I was doing this (*SCREAMS HYSTERICALLY*) but you gotta keep it cool y’know?

Empress is set 65 million years ago, and focuses on the Earth’s first rulers. Those who lived here before us. The Earth is ruled over by the ruthless dictator, King Morax who, I have to say, has more than a touch of the Thanos about him. He is a huge, red, powerful-looking character who rules over his subjects with the threat of, well, death to be honest. The double page spread with the T-Rex in issue # 1 explains all. You wouldn’t want to meet him at night down a dark alley, let’s just put it that way.

From there, we are introduced to the main protagonist of the series, Emporia. Emporia is a mother of three and desperately wants to escape her tyrannical husband and give her children a safe, normal life (I do like to see a good strong female lead in a comic). Her children are 15 year old Aine who wants to stay with her father, 10 year old Adam who is a gentle soul and would not survive the gruelling trials ahead of him in order to become a ruler, and 18 month old Puck who just looks like he’s happy to be anywhere, quite frankly. Dane Havelock is the loyal bodyguard helping Emporia and her children escape to her home planet. He’s a handsome guy, I can see why she chose him *cough*

Issue #1 of Empress doesn’t beat around the bush. It starts as it means to go on: fast and furious. Immonen’s art moves and flows quickly, giving the reader an intense feeling of anticipation as Dane, Emporia and her children try to escape from Earth. The pace is ramped up in issue #2, ending on an awesome last page spread which will have you champing at the bit for issue #3. The sense of scale with some of the art is amazing, especially some of the crowd scenes in issue #2.

Millar is going back to sci-fi territory with this one and it has a truly epic, space opera feel to it. Initially, when you look at the front cover of Empress it doesn’t strike you as a Millar comic. The art is very different to his recent creations; Jupiter’s Circle and Legacy, Chrononauts and Huck (I am a little bit in love with Huck so you’ll have to forgive me for mentioning it more than once). It is both bold and colourful; Immonen’s art really drawing the eye with its impressively dramatic style.

Simply put, Empress is a really good read. It’s a fast-paced, utterly enjoyable space romp (yep. I said romp) with all the impressive characteristics that make up a truly great comic. I’m looking forward to seeing where Millar and Immonen intend to take these characters over the rest of the series. This is most definitely one to pick up in April.