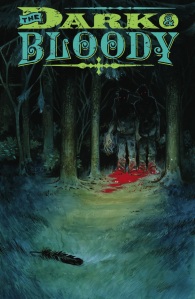 After a strong opening issue that managed to build up an impressively unnerving sense of dread, Shawn Aldridge and Scott Godlewski give us a little glimpse of the real horror that lurks in the shadows here in the second installment of THE DARK & BLOODY.

It’s clear that writer Aldridge doesn’t want to tip his hand too soon, slowly drip-feeding us details of the events in Iraq that presumably led to the horror of the present day, and letting the reader’s imagination do the bulk of the work for the time being.  Aldridge has also done a great job in crafting main protagonist Iris, portraying him as a deeply conflicted man trying to do the best he can for his family in spite of clearly living with some fairly sizeable demons.

The cherry on this twisted sundae is Iris’s son Shiloh and his friendship with Ayah, the mysterious girl he met in the woods who clearly has some secrets of her own.  It’s a tense affair throughout, and even though this issue features a brief explosion of action horror, it’s the pervasive notion that there’s something not quite right at all times that really makes this series sing.

Artist Godlewski uses a measured, controlled approach to his linework throughout, showing restraint even in the more frantic, chaotic moments.  His style is vaguely reminiscent of Mike Richardson’s work on the critically-acclaimed NAILBITER, which is intended as a compliment given the fact that NAILBITER is one of the most consistently impressive horror books of recent years.  The true avian horror has still to be fully revealed, but Godlewski continues to tease us with fleeting glimpses of feathers and talons, something which is guaranteed to make the eventual reveal all the more shocking.

While “rural horror” seems to be a bit of a growth industry in today’s world of comics, rarely has the genre been handled as confidently as it is here.  Godlewski and Aldridge have crafted a truly unnerving tale that will shock, excite and captivate readers, all the while almost daring them to keep watching as the horror unfolds.  Highly recommended. 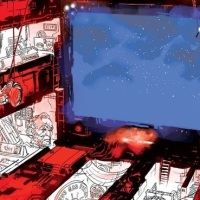