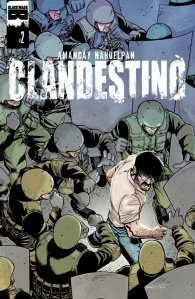 After a prolonged hiatus due to a variety of logistical and legal issues, fledgling publisher Black Mask Studios is back, and back with a bang courtesy of the second issue of Amancay Nahuelpan’s CLANDESTINO.

The story is based around the dictatorship of the South American country of Tairona, a country which has become a lawless frontier following a bloody military coup.  The hopes of the people rest on Clandestino, a revolutionary figure who barely escaped the military attacks as a child, and who has grown into a sunglasses-wearing, mustachioed bringer of death in the meantime.

The previous issue saw Clandestino’s group attacked and almost completely wiped out by the military police, and his lover Leena captured and whisked away for interrogation.  Naturally, Clandestino isn’t too pleased, and this issue takes the form of his typically flamboyant rescue and escape attempt.

Subtlety is most definitely off the table here, with CLANDESTINO serving as an amalgamation of any number of different action movie tropes, and featuring a gloriously over-the-top style of storytelling and artwork from Nahuelpan.  The dialogue is kept relatively sparse throughout – save from a lengthy monologue from the evil “General” – with Nahuelpan preferring to let the physical aspect of his story carry the load.  Cars are chased, grenades are lobbed, samurai swords are used to slice and dice people — it’s essentially a non stop surge of action from beginning to end; an approach that has both its pros and its cons.

In the pro column, it looks fantastic, with Nahuelpan clearly having an absolute blast with the artwork.  Why try and stealthily infiltrate a prison to rescue your girl when you can just plough your Cadillac through the front gate in a hail of bullets, right?  While the occasional wonky sense of perspective detracts a little from some of the sequences, this really isn’t a book that tries to take itself too seriously from a visual point of view, and if you can ignore the minor niggles with the visuals, there’s definitely a lot to like here.

On the con side of things, aside from the generic storyline and hero, the tone of the series remains a little uneven.  Rather than going ‘full Machete’ and embracing its ludicrously over-the-top style, CLANDESTINO instead seems to take itself rather seriously throughout, at least in terms of the story, undermining some of the key beats by refusing to acknowledging how ridiculous they are.  While it definitely doesn’t need to devolve into out and out parody, I can’t help but feel that a slightly more tongue-in-cheek approach would definitely help this series flow a little better, and overcome some of its familiarity and predictability.

In the end, CLANDESTINO is a fun but ultimately flimsy read with a fairly by-the-numbers story and protagonist which finds itself being lifted from mediocrity by virtue of its impressive artwork and the sheer enthusiasm of its creator.  Those looking for any sort of nuanced storytelling or multi-layered character development will find themselves bitterly disappointed, but those of us who can appreciate a mustachioed hero dispatching a squadron of corrupt military police in a shower of blood, bullets and eyeballs are in for an absolute treat.  Make of that what you will.