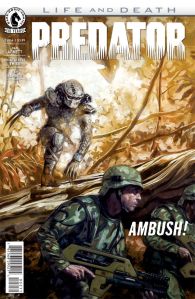 The discovery of a new ship forces the marines to regroup in the second instalment of Dan Abnett and Brian Theis’ Predator: Life and Death. The first issue was an engaging (if a little exposition-heavy) introduction, and with the full scale of the threat now revealed, it’s time for the creators to ramp up the action and drama as some big decisions have to be made.

Character-wise, there really isn’t too much going on here, with everyone so far falling into a fairly well-worn cookie cutter template. We have the tough, non-nonsense leader, the arrogant, money-grabbing Weyland Yutani rep, and – of course – more macho, posturing marines than you can shake a pulse rifle at. It’s a definite surprise, given Dan Abnett’s track record for creating rich, compelling characters, that the people here feel so one-dimensional. It’s not all bad however, as the dialogue crackles nicely with an entertaining back-and-forth about just who is really in charge, and some the banter is top quality, feeling like it could have been ripped straight out of a classic 80’s action flick.

Unfortunately, while the macho bravado is all well and good, it doesn’t exactly lend itself well to creating engaging protagonists, resulting in a crew of marines who feel – to be blunt – completely and utterly expendable. It all feels a bit like the original John McTiernan Predator movie, with the bad-ass soldiers being whittled down gradually, which wouldn’t necessarily be a bad thing if it weren’t for the fact that we seem to have skipped the first forty-five minutes of the movie that allowed us to actually get to know them first.

It’s fun enough, sure, and artist Brian Thies does a solid enough job with the Predator-on-Marine carnage, even if some of his backgrounds can feel a little sparse or, in a lot of cases, non-existent. There are some fun panels and sequences here, and while he does seem to struggle a little with conveying emotion during the more ‘talky’ moments of the story, there’s no denying that his action set-pieces are top notch.

It’ll be interesting to see where the story goes for here, as – while it’s undoubtedly an exciting enough dose of Predator-themed fun – I just can’t help shake the feeling that we’ve seen everything here before. If it sounds like I’m being overly harsh here, it’s only because I had such high hopes for this one, given Dark Horse’s previous track record with these properties and – of course – the undeniable pedigree of its writer.

A bit of a stumble then, and while the enthusiasm of the execution is commendable, the overall effect is diminished by some flat characters and a fairly predictable story — for the time being, at least. I’m keeping my fingers crossed for the rest of this series (and for the rest of the “Life and Death” event as a whole), but this isn’t exactly the start I’m sure a lot of readers were hoping for

If you want to find out more about Predator: Life and Death, make sure to check out our interview with series writer Dan Abnett by CLICKING HERE.