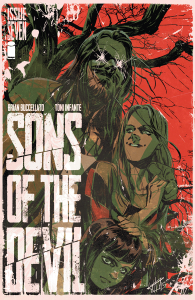 If you haven’t been reading this series yet, then stop what you’re doing and pick up the first seven issues immediately. This Manson-inspired, Jonestown-esque Satanic saga is truly the stuff of nightmares, and that’s one of the biggest compliments you can give a horror comic.

Up until now, troubled lead character Travis has been doing a bit of soul searching. Little does he know the dark lord has plans for said soul. All he wants to know is where he came from; and where he came from knows exactly where he is – which, in this case, isn’t a good thing.

The previous issues have toed a fine line between ambiguity and throwing us enough exposition to make the next installment an essential pick-up. This one takes us into the past and gives us a disturbing glimpse into the night baby Travis escaped the shackles of Satanic doom along with the others. Needless to say, it’s thrilling stuff that’s bound to go down well with anybody fascinated with the macabre.

Giving away too much about this series is doing you – the reader – a disservice. It’s horror at is purest made all the more effective because of how strong its characters are. Travis is a sympathetic protagonist worth rooting for, whereas the villains are the personification of pure evil – made all the scarier knowing that some of them are hidden in plain view. It reaffirms that childhood nightmare that your neighbours might be monsters and devil worshippers behind closed doors – or your future psychiatrist.

Sons of the Devil intrinsically weaves horror, mystery, drama and strong characterisation to great effect, and if you’re a horror aficionado then it’s everything you could possibly want from genre fare – intelligence, intrigue, and the fear of the unknown manifesting itself in a way that’s believable, despite its supernatural leanings.

The writer of this piece was: Kieran Fisher
Kieran Tweets from @HairEverywhere_