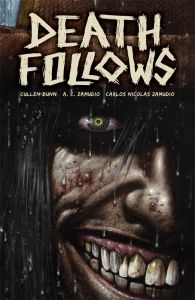 Originally released as “The Remains” back in 2014 by Monkeybrain Comics, Cullen Bunn and A.C. Zamundio’s stunning rural horror series gets a new release – and a brand new name – courtesy of Dark Horse Comics this week.

The story is based around Birdie, a young farm girl who lives with her kid sister Abbie, her heavily-pregnant mother and her aging, arthritis-ridden father.  When a stranger named Cole Jensen shows up looking for work, Birdie’s father views it as a perfect opportunity to get some much-needed help, but Birdie isn’t convinced – especially when a series of strange, unexplained events seem to coincide with this newcomer’s arrival.

I’m gonna say it right now – Cole Jensen, the aforementioned stranger, is one of the most genuinely unsettling horror characters in recent years.  From his arrival, appearing like a shadowy scarecrow on the horizon, to his leering smile, all teeth and gums, there’s something genuinely chilling about the man.  For the bulk of the story however, Cole remains something of a mystery; a veiled threat lurking on the periphery as the strange events – dead animals and people suddenly coming back to life whenever he’s around – gradually and terrifyingly unfold.

It’s a beautifully structured tale from Bunn, with a sense of chilling mystery throughout as Cole Jensen gradually becomes more and more menacing, and Birdie’s narration of the events in the past tense letting us know that things are most definitely not going to end well.  The final issue takes things to a whole new level, with things getting incredibly dark as Cole reacts somewhat badly to being fired, and the shocking events which transpire having ripples that change the entire family’s lives forever.

Zamundio’s artwork is fairly unconventional, to say the least, seeming almost cartoony at times, with slightly exaggerated facial features on his characters and thick, heavy linework throughout.  And yet, it manages to work perfectly alongside Bunn’s words to really hammer home the horror of the situation.  From reanimated rats to reanimated children, the horror is delivered as directly and as shockingly as possible, with absolutely no punches being pulled, save for the very last page, which finally offers just a twinge of restraint, making the shocking denouement even more impactful in the process.

It’s becoming more and more apparent, perhaps without many of us realising it, that we’re all now living in the midst of what could easily be viewed as a new “Golden Age” of horror comics.  Every single week it seems like more and more gripping, engaging, creative and downright shocking horror titles are hitting the shelves, and both Dark Horse Comics and Cullen Bunn are right at the forefront of this resurgence.  In fact, actually I’d go so far as to say that this is one of Bunn’s finest pieces of work.  And when you’re talking about the writer of Harrow County, that’s high praise indeed.  Highest of recommendations for this one, folks.