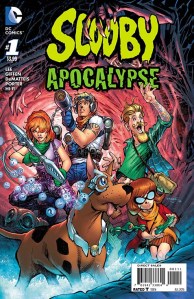 A Scooby-Doo reboot, you say? Ruh-Roh.

Excuse me while I sharpen my pitchfork and prepare the torch for burning.  How dare they remake my childhood!?  Oh, this will not be tolerated.  The withering put-downs pretty much write themselves, too.  Scooby-Doo? How about Scooby-Don’t?  And so on.  Oh boy am I ready to tear this poor, unsuspecting comic a new one.

Except… hang on… it isn’t actually that bad, is it?  I mean, there are some flaws with the execution, and it’s as much a Scooby-Doo comic as Saga is a rebooted Jetsons, but dammit if this isn’t actually a rather fun little read.

The story put forth by Giffen and DeMatteis is fairly straightforward, with Fred and Daphne bringing their failing television show “Daphne Blake’s Mysterious Mysteries” to annual eccentric-fest “Blazing Man” on the back of a hot tip from a whistleblower that could potentially end up saving the world.  At the same time, hipster Shaggy (hippies are sooo thirty years ago, doncha know?) and Scoob are enjoying a brief escape from the government facility the former trains the latter in, blending in with the assembled weirdos and doing their best to enjoy a little no-cheese, no-tomato, gluten-free pizza.  As you do.

The humour is consistent, if a little broad at times.  Handsome-but-dumb Fred provides the highlights, although perhaps his best line of the issue is hammered into the dirt by being repeated about a dozen times, becoming noticeably less funny every time.  That said, there’s definitely a lot of charm in the back-and-forth banter between the group as they come together for the first time, and the slight tweaks to the established characters leave them feeling fresh yet reassuringly familiar.

It’s also worth noting that, in spite of its target audience presumably being younger readers, this is actually a fairly dense first issue with a lot of exposition to get through.  There’s pretty much zero action to be had, and the writers adhere almost entirely to a six-panels-per-page approach that can feel a little heavy-handed at times.

One thing that definitely doesn’t feel heavy-handed is the artwork, provided here by Howard Porter, featuring bold, dynamic characters aplenty and a slightly less cartoony approach than some readers may have been expecting.  Yes, it’s still a bright, lively book courtesy of Hi-Fi’s typically eye-catching colour work, but the characters themselves are only ever-so-slightly exaggerated, and Scooby actually looks like a Great Dane rather than, y’know, a cartoon dog.  Some people may prefer the cartoon origins, but personally, I actually rather enjoyed the redesigns and felt that they worked well alongside a story that goes a little deeper than “Jinkies! There’s a ghost haunting the old abandoned funfair!”

Overall, this was a fairly tricky one for me to review objectively.  On one hand, I think it’s safe to say that absolutely nobody was crying out for a rebooted and updated Scooby Doo series.  But at the same time, if you take away the fact that it’s (loosely) based on a beloved children’s television show, it’s actually a fairly decent first issue of a comedy adventure series.

Ultimately then, against all expectations, Scooby Apocalypse manages to present a bright, lively and creative first issue that – while being a little exposition-heavy in places – sets the table admirably for the series to come.  And while the Scooby Purists (that’s a thing, right?) may balk at the very concept, there’s no denying that, when you get right down to it, this is actually a hell of a lot of fun.  Zoinks indeed. 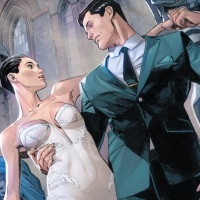