The new series, set to hit shelves on the 3rd of August, introduces us to the title character, a regular, somewhat inept video store clerk who finds himself thrust into the rather unexpected role of “saviour of planet Earth” when an alien invasion threatens the destruction of the planet.

With Oni Press absolutely killing it lately with books like THE MIGHTY ZODIAC and ANOTHER CASTLE, we simply had to find out more about this amazing-sounding project, and were fortunate enough to be able to sit down to chat with both of the co-creators to chat about all things STEINBERG.

Cover to issue #1 from Tony Fleecs – CLICK TO ENLARGE.

Joshua Hale Fialkov: He’s sort of a version of who I was always scared to be. He’s rapidly pushing through his 20’s, living like he’s 19, and not setting the world on fire. He’s an everyman in the worst possible way.

BCP: The series is described as a “sci-fi-rom-com-dramactioner”, which is – y’know – amazing. What kind of inspirations have you drawn on in putting together such a… unique… genre?

JHF: I think this book, more than maybe any I’ve ever done, hits almost every one of my favorite things. And, more than that, a lot of it comes from the relationship I’ve had with Tony. We move pretty effortlessly from talking about Dario Argento to Fellini to Howard Stern and then, for good effort, back to Captain America. Pop culture is sort of a root of our relationship, and, I’d argue the root of who we are.

TF: I’m real proud of how this comic manages to be very personal and a silly genre mashup at the same time. It’s like the sequential art version of Josh and I hanging out. Lots of laughs. Lots of drama. Some light action.

BCP: Don’t take this the wrong way, but is there any sort of autobiographical aspect to Jeff?

TF: He’s a much thinner, slightly more aimless version of me in my 20s. Which is to say he’s hilarious & charming. Everyone says so.

BCP: The one thing I think I enjoyed most about the first issue was the hilarious cast of supporting characters. Do you each have a favourite?

JHF: I like Captain Dave a lot. I’m immensely proud of that Windows ME joke. Nobody else will think it’s funny, but it’s a hill I’m totally willing to die on.

TF: Thanks! I like Jeff’s roommates Jimmy and Sienna. I had Roommates for up until probably 4 years ago and there’s something really funny and specific about roommate relationships & interactions. Some of my favorite upcoming stuff in the book is Jimmy/Sienna stuff.

BCP: Tony, how did you go about putting together the visual side of the series and the character designs?

TF: I designed these guys, gosh it’s been a bunch of years ago. Before My Little Pony. And going back to them I was impressed to see that younger me had made sure that they all had a distinct shape/silhouette. I like to design characters starting with the writing. Their attitude tells me what shapes to start with. So Jeff’s a little whispy– he’s shaped like a blade of grass. Rolo’s headstrong and sort of obtuse– he’s shaped like a boulder, etc etc. I really love drawing these guys.

BCP: The first issue features a lot of fantastic visual gags. Do you have a particular moment that you enjoyed bringing to life most?

TF: I did a pratfall that I think came out good. There’s a page we wrote where a character is just suddenly not wearing pants for no discernible reason. I feel like I realized that one pretty well too.

Variant cover to issue #1 from Chris Burnham – CLICK TO ENLARGE

BCP: Without spoiling things too much, what kind of trials will we see Jeff going through to save the world? Are we talking old-school Hercules stuff, or something a little more cerebral?

JHF: It’s a little bit of both. The trials of Hercules are certainly the model for the story though. If enough people read the book, we’ll get to do all ten.

BCP: The second chapter features a pretty fantastic guest cameo from a certain President of the United States of America. Can we expect to see more famous faces making an appearance during the rest of the series?

JHF: That cameo was a huge sticking point, as over the time we’ve been putting the book together, Obama has been elected, re-elected, risen, fallen, and risen again. Eesh. But, yes, more of that stuff.

TF: The book exists in our world and I like the texture we get from throwing real world people into the mix. So yes. Expect more of that.

BCP: How do you think you’d each handle being in Jeff’s situation as the (somewhat reluctant) saviour of the human race?

JHF: Listen, I don’t even know how to ride a bike. I’d be totally boned .

TF: I think I’d dig the spotlight for a couple minutes and then totally fall apart. Earth doomed.

BCP: What other projects do you each have coming up that you’re able talk about?

JHF: THE BUNKER and THE LIFE AFTER are both coming to an end at Oni Press, with final arc from each starting right now-ish. There’ll be another new Oni book with Gabo replacing those soon, and, a new edition of my book TUMOR with artist and co-creator Noel Tuazon, also from my pals at Oni.

TF: I’ve got a LOT of ponies. A lot. Actually, the month STEINBERG comes out I’ll also have my first full-on writer/artist issue of MY LITTLE PONY. Up until now I’ve just been drawing them. So check out MLP: Friends Forever #31. Key Tony Fleecs issue.

BCP: And finally, if you could each say one thing to a reader who wasn’t sure about picking this one up to help convince them, what would it be?

JHF: This book is damn funny. I feel like I can say that without being egotistical, cause I didn’t write it alone. Also, 1/2 of the creative team is very handsome.

TF: Yeah. I have a hard time saying something I wrote is really funny. Somebody funny wouldn’t say that. It’s like when someone says, “Humor” ugh. Luckily Josh wrote this too so I’ll say the Josh parts are goddamn hysterical. Plus! The first issue’s double sized and I always love that. Lots of story for your money.

The first issue of JEFF STEINBERG can be pre-ordered until the 11th of July using Diamond Code JUN161656 (Retail cover) or JUN161657 (Variant Cover).  And, having read the first issue, we can vouch for the fact that it’s absolutely bloody hilarious.  We highly recommended getting this one ordered at your local comic shop as soon as possible. 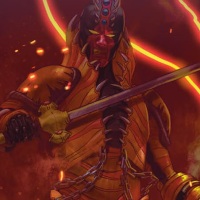