After a fairly uneven journey to get to this point, we reach the final chapter of Len Wein and Kelley Jones’ Swamp Thing mini-series.  And, rather than what could have potentially been a climactic and dramatic showdown between Alec Holland and the now Swampified Matt Cable, the series ends with a bit of a whimper, without any real sense of peril or genuine threat.

Sure, there are some great moments along the way, including a twist that – while perhaps telegraphed a little for long-time Swampy fans – is executed with flair and gusto by both Wein and Jones.  There’s also no denying that, once again, this book looks absolutely gorgeous, with Jones’ distinctive pencils and dramatic inkwork packing the pages with a much-missed sense of horror than harks back to the early inception of the character.

It’s just that, when all’s said and done, everything resolves itself a little too easily.  Sure, the twist (which you can see in all its glory in the preview below) adds some intrigue to the proceedings, but rather than actually changing things in any significant way, only really serves as an (admittedly wonderful) opportunity for Jones to flex his artistic muscle with an iconic character.  There’s also the nature of the final conflict, which basically boils down to “Matt Cable” standing and procrastinating, powerless to actually do anything while Alec does his thing – or rather, while Alec’s companions do their thing.

I can’t help but think back to the first two issues of the series and the sluggish, almost self-contained start that perhaps directly let to this somewhat stilted finish.  Within the constraints of the six issues, I would have liked to see the final showdown drawn out a little more to give it a higher sense of significance rather than – as it turns out – Alec rocking up, mob-handed, and dispatching the baddie without breaking a sweat.  Sure, there’s an interesting aspect to the story regarding the self-sacrifice of Holland and his turmoil about whether he wants to actually remain Swamp Thing or not, but the payoff just doesn’t land like it should and there’s a definite sense of “well, we’re right back where we started at issue one” at play here.

I’m a massive Swamp Thing fan, as anyone who knows me will attest to, so it’s frustrating to me on a personal level to not find myself absolutely loving this series.  I feel like I should, y’know?  I was absolutely gutted when the New 52 run was eventually cancelled, and I feel like I should be of the mindset they hey, any Swamp Thing is better than nothing, right?  And that’s true, but there’s also no denying that – in spite of the stellar, undeniable pedigree of its creators – this latest series never quite delivered the goods like I hoped it would.

If it sounds like I’m being unduly harsh, it’s because I absolutely love the character, and also because this particular creative team had the potential to deliver something truly special, rather than – as it turned out – a beautifully illustrated, ultimately unsatisfying diversion. Don’t get me wrong though, this isn’t a bad series – or a bad issue – by any stretch of the imagination.  It’s just nowhere near as good as it could, and should, have been.

If you want to find out more about Swamp Thing, make sure to check out our interview with series artist Kelley Jones by CLICKING HERE. 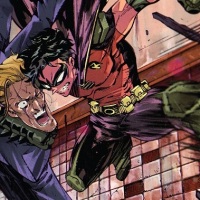