Ahead of its release at this weekend’s Glasgow Comic Con, I’m thrilled to be able to take a look at the latest edition of Papercuts & Inkstains from Madius Comics.  As with most anthologies, the quality of their previous issues has ebbed and flowed somewhat, but the Madius crew clearly deserve a doff of the proverbial hat for their impressive “hit rate” to this point, with only a couple of clunkers over the course of their first five issues.

Thankfully, two of the three strips here are continuations of previous stories, both of which were freakin’ awesome, and the third features artwork from BCP favourite Bob Turner, who blew us away with his work on silent comic DTHRTL. All signs point to another belter of an issue then, so let’s dig in and see how we go… 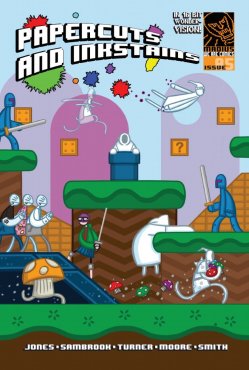 Actually, before we get to the first strip, let’s talk about that cover.  A classic example of Bob Turner doing what Bob Turner does best, packing minimalist charm into his straightforward yet deceptively expressive style, and doing it this time in glorious 16-Bit Wondervision! And hey, why not?  Great stuff, and a brilliantly eye-catching Mario-esque design from Turner.

Anyway, the first strip – Immersive Gaming Experience – is an interesting one.  On the one hand, it looks amazing, with Turner doing his thing yet again, illustrating the tale of an excited gamer who gets a little more than he bargains for with his latest video game console.  Once again, it’s the smaller details of Turner’s work that really sell the story, and his panel-heavy layouts really work well in portraying the highly stylised video gaming environment.  On the other hand however, the story itself falls a little flat, and in spite of the charm of Turner’s artwork, it all feels like a set up for a gag that doesn’t really land.  Sure, there are some chuckles to be had along the way – particularly with the different types of music present in the game – but I didn’t quite find myself as blown away as I’d hoped I would be when I first heard of this Madius/Turner collaboration. 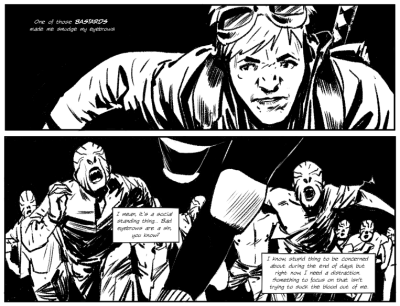 The second story, Vampire Wonderland #2, is a welcome return to a strip that I didn’t actually realise was the beginning of an ongoing story when it first appeared in P&I #3A.  A post-apocalyptic vampire tale that focuses squarely on its lead character Sabi, this latest strip sees her on the run again from the ever-present fanged beasties, running into a mysterious stranger who seems to want to help her.  She’s definitely an intriguing protagonist, and her quirky inner monologue – not to mention the brief conversation with her apparent saviour – gives us some interesting insight into her character, even if some of the gags feel like they’ve been shoehorned in a little uncomfortably.  Paul Moore’s artwork is its usual intense, heavily-inked self once again, perfectly capturing the intensity of the chase and the tension of the new arrival with its distinctive approach.  It’s a tiny bit difficult to follow at times, particularly in the close-up panels, but the overall aesthetic is truly commendable, and the gut punch of a final page makes the upcoming third installment of this story absolutely essential reading. 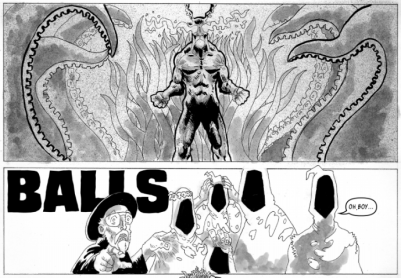 Finally, as should be expected by now, we check in with the Profits of Doom, the unquestioned cornerstone of the Papercuts & Inkstains series – and quite possibly Madius Comics as a whole.  In fact, if you’re looking for a perfect example of just what these Madius fellas are all about, then look no further than the exploits of wannabe satanic cult of .B.O.O.B.D.A.E. as they try to save the world from the Chaos Lord (slash deer) they summoned.  Hilarious, beautifully illustrated and quintessentially British, the Prophets’ bumbling ways and internal bickering make for a fantastic read, and while some gags (the group’s struggles to get through a revolving door and the return of a certain flaming cyclist) may fare a little better than others (Terry treading the Griffins like giant cats), the quality of humour on display here remains consistently high.

Yes, the story may have gotten a little unfocused along the way, with unnecessary “side quests” (something the writers knowingly acknowledge) and the introduction of mysterious Pratchett lookalike bookshop owner “Terry” distracting a little from the fantastic dynamic between the Profits themselves, but there’s no denying that in spite of these niggles, this is still a cracking series.  Mike Smith’s artwork continues to alternate between subtle visual comedy and full-on artistic spectacle, and the final page of this particular strip is quite possibly his best work yet.  Fantastic stuff.

Overall then, Papercuts & Inkstains #5, while not flawless by any means, serves as a fantastic example of the sheer wanton creativity that Jones and Sambrook possess, as well as their fantastic knack for pairing their eccentric, silly and occasional inspired writing with the perfect artists to really make the stories pop.  Well worth a look, and the rest of their back catalogue ain’t half bad either.

Papercuts & Inkstains #5 will be available at Glasgow Comic Con on the 2nd and 3rd of July, and then shortly thereafter – alongside the aforementioned back catalogue – on the Madius Bigcartel Page.