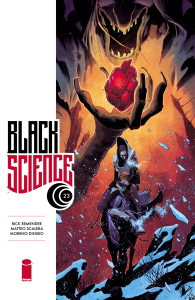 For twenty-two issues now, Black Science has been telling the tale of genius scientist (and would-be anarchist) Grant McKay, whose greatest invention – the Pillar – sends he and his companions spiraling through dimensions and the layers of reality itself when it malfunctions on its maiden voyage.  A sprawling, action-packed and deeply emotional journey, the series so far has seen twists, turns, betrayals and death, and with Grant now becoming separated from the rest of his crew – including his children – he finds himself desperately tracking them through impossible realities, trying to reunite his family and hopefully make the final leap home.

This latest arc provides a far simpler story than we’ve seen for a while – relatively speaking, of course.  Whereas the Godworld arc focused primarily on Grant’s existential crisis and inner turmoil, packing its pages with surrealist imagery and fractured internal monologues, this latest story is a far more direct affair, harking back to the frontiersman adventure of the early issues.  The subtle shift in the direction of the series is working wonders too, with Grant’s newly refocused quest now taking him from dimension to dimension as he homes in on the tracking devices in his team’s suits.

Remender also streamlines the storyline experience here, focusing squarely on the here and now.  No flashbacks, no jumping back and forth between different situations, just a father trying to make amends and reconnect with his daughter – albeit in a crazy fantasy world filled with gods, magical artifacts and witches.  The story has far more punch as a result, making for some truly captivating exchanges between Grant and Pia, particularly in the latter portion of the book.  Remender saves his best for last though, serving up a final page which provides a tense ultimatum that has the potential to change the entire series moving forwards, and – once again – leaving me with little choice but to face the painful, month-long wait until I can get my hands on the next issue.

Visually, there’s no doubt in my mind that this is absolutely one of the best looking books on sale at the moment, and the sheer unbridled genius of Matteo Scalera practically explodes off the page in every single issue.  The first half of this latest chapter is relatively restrained in Scalera terms, but still manages to be packed with expression, tension and humour as Grant strikes out on his own (well, almost on his own) in a desperate attempt to make things right.  However, when the world of Black Science meets the world of “black magic” in the second half of the issue, Scalera – assisted as always by stunningly talented colourist Moreno Dinisio – puts the pedal to the metal, churning out some absolutely jaw-dropping pages and sequences.  Seriously folks, the witch!

Okay, let’s cut to the chase.  Black Science is, for my money, the most consistently brilliant series on the shelves today, an accolade it has held – in my opinion, at least – for the best part of three years now.  Remender’s work has honestly never been better, and his seamless collaboration with Scalera continues to redefine just how well a writer and artist should be working together.  If you haven’t been following this series until now, you really, really need to pick up the first four trades and get caught up right away.  You can thank me later.