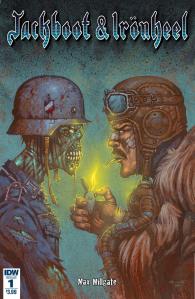 The first issue of IDW Publishing’s Jackboot & Ironheel introduces us to Eddie Neale, a youngster who grew up wanting nothing more than to play for his beloved West Ham United.  However, after only being allowed a brief, fleeting moment to live his dream, the outbreak of World War 2 sees him signing up as an airman, leading bombing runs into Nazi Germany.

Eddie’s plane is shot down behind enemy lines and he finds himself captured and taken to P.O.W. camp Lungotz Luftzig, whereupon he starts to realise that he may have bigger problems than Nazis to deal with – like, say, the dead coming back to life?

The series is being launched as part of IDW’s “Creator Visions” event, with a brand new creator-driven book being launched every five weeks, and while there are some derivative aspects to the story (Nazis and zombies? Again?), there’s a definite sense of charm to Max Millgate’s execution that helps forgive a multitude of sins here.

His writing is solid, if a little blunt, introducing us to Eddie, his Nazi captors and Sister Evangeline – a Nun who may prove to be his salvation – in a fairly direct manner.  Some of the dialogue seems almost intentionally campy, with lines like “Get those hands up higher, footballer! Like you’re about to do a throw-in!” ensuring things aren’t ever in danger of being taken too seriously.  The horror aspects of the story are handled far better, with an impressive sense of dread throughout the first appearance of a supposedly deceased Nazi officer, and a nice dose of schlock in the final pages of this issue.

Visually, Millgate adopts a somewhat stylised approach to his artwork, with heavy shadowing and jagged edges aplenty.  It works well during the action sequences, adding a sense of dynamism which is vaguely reminiscent of the likes of Mike Mignola or INJ Culbard, but fares a little poorer during the ‘talky’ sections, with some waxy, vacant facial expressions detracting from several attempts to build tension or character development.

Overall, while there are a few uneven moments here and there, the central premise is solid – if a little clichéd – and there’s a wonderfully old-school British sensibility to the writing that adds some definite charm to the proceedings.  Perhaps not quite an essential purchase just yet, but definitely one that’s worth keeping an eye on, particularly if you’re a fan of zombies, Nazis or classic “stiff upper lip” war stories. 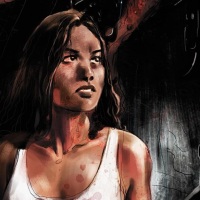