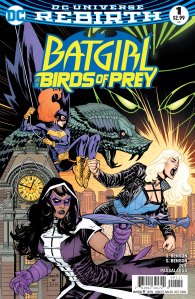 Considering Batgirl, Black Canary and the Huntress-starring Grayson were up there with the best books DC was producing pre-Rebirth, this new iteration of the team book that features all three has some big shoes to fill, but sibling writing duo Julie and Shawna Benson are doing a bang-up job so far.

Their background in TV scripting is a huge factor in this, with a natural ear for dialogue and well-rounded characters bringing Babs, Dinah and Helena to vivid life. They’re superheroes, sure, but much in the same way that Joss Whedon did with Buffy, the Bensons are bringing the humans out of the superhumans.

Whedon’s Buffy is actually echoed a lot in these pages, which is never a bad thing. It’s funny, but in a sharp, verbal way. The beats of dialogue are perfectly paced for maximum effect, whether it’s to gain a laugh or deliver a punch, while their approach to the action scenes is never gratuitous or shoehorned in.

Plotwise, they’ve set up a nice little mystery of who is impersonating Oracle. Whoever it is, they have as much info as Babs did when she was behind the hologram, taunting Batgirl and Canary with their secret identities.

The Huntress is now a grudging member of the team, coming to an uneasy alliance with the heroes as part of her mission to track down and kill the mobsters who wiped out her family. Canary acts as a mediator here, coming in a perfect blend herself of the more straight-laced Barbara and Helena’s wild side. It’s great stuff and the interplay between three is a huge part in what majors this book so entertaining.

Claire Roe’s exuberant and kinetic art is a perfect match for the Bensons’ peppy script. She’s got a real talent for capturing action mid-shot, as much at home on frenetic martial art battles as when nailing the awkward laughter that comes when your friend’s dodgy ringtone goes off when you’re out on a mission. It’s her facial expressions that really shine though and again, it’s real people we’re seeing here, they just happen to be superheroes.

If you’ve been a fan of these characters’ previous books, this is a must-have. Even if you weren’t, now’s the time to start.